Album Review: Iron City Houserockers – Have a Good Time … But Get Out Alive! 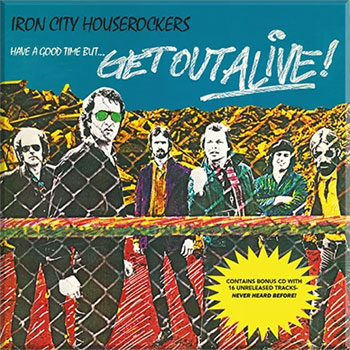 There’s a gritty, heartland strain of rock ‘n’ roll that has persisted through the decades. Bruce Springsteen’s best material is an exemplar of the style; shorn of artifice and filigree, it’s about visceral emotions and musical muscle. Southside Johnny and the Asbury Jukes did the same kind of thing, as did the Smithereens, though in their hands the approach sounded quite different. (Hey, I just realized all I just named three acts that are from New Jersey; might be something to that.)

Lesser-known but in the same tradition was Pittsburgh-based Iron City Houserockers. Led by guitarist, singer and songwriter Joe Grushecky, ICH was together for only a short while, making four albums. But the band’s second, Have a Good Time … But Get out Alive! is quite a corker. And if the original twelve-song 1980 LP wasn’t good enough, a new reissue adds a second disc stuffed with demo versions and previously-unheard material.

Listening today, four decades after the album’s release, it sounds fresh and timeless. The Houserockers’ sound has one foot in heartland rock, the other in a high-octane powerpop vein. There’s sincerity and passion in Grushecky’s vocal work, and the band positively cooks. Marc Reisman’s harmonica is rarely placed out in the front of the mix, but it’s there in a way that adds an urban r&b feel to the tracks. Don’t be surprised if you don’t find yourself singing (shouting, really) along with the chorus on the title track.

The rest of the record is equally spirited. Even when the melody sticks to well-worn I-IV-V structures (as on “Pumping Iron”), there’s enough energy and commitment conveyed in the singing and playing to win over the most jaded listener. Gil Snyder’s assured piano work does more than follow along with the guitars; for those who want to dig deeper into the music, there’s plenty there to hold interest.

Even when the band tackles a minor-key number like “Hypnotized,” they get it right, delivering a smoldering arrangement that would make the song fit neatly into a playlist alongside Graham Parker, early Boomtown Rats and other fiery acts of the era who had plenty on their minds.

It’s worth noting that even though the Iron City Houserockers deserve mention alongside Springsteen, Parker, Geldof and the like, the band rarely sounds like any of those artists. One of the few tracks to evoke strong thoughts of another artist is “Price of Love.” It may remind listeners of Mott the Hoople. What’s interesting about that is the fact that Mick Ronson and Ian Hunter guest on the record … but not on that track. So really, the similarity has more to do with Grushecky being a kindred spirit with those musicians.

“Angela” lifts its opening chord progression directly from The Who’s Live at Leeds arrangement of “Summertime Blues.” But that’s okay in the context of the album, because the song itself isn’t a ripoff; the quote is sort of a wink at knowing members of the audience, something that (subtly or not) gets across the idea that the Iron City Houserockers are students of rock ‘n’ roll and what makes it vital.

The fact that Have a Good Time … is such a solid album makes the prospect of a second disc of demos and the like a tantalizing one. But as good as those demos are, the murky sonic character and spare instrumentation make most of them of interest primarily to hardcore fans and/or music journalists. They do serve to underscore just how important was the creative contribution of producers Steve Popovich, Marty Mooney (aka The Slimmer Twins) and Ronson.

An exception is the demo for “Don’t Let Them Push You Around.” It’s still spare and flat-sounding, but the power of the performance busts through nonetheless. And the demo for “Don’t Stop the Music” has a live-in-the-studio feel that can’t be denied.

The fly-on-the-wall audio verité of “Hypnotized (A Work in Progress)” will be of interest to the kind of listener who digs studio outtakes. And a pair of covers, “Rooster Blues” and “Do Wah Diddy” shine a light on the influences that gave rise to the band in the first place. “Rooster Blues” isn’t revelatory, because it sounds pretty much as one might expect, but it’s quite enjoyable, and fits in with the flow of the first disc more seamlessly than do the Disc Two demos. “Do Wah Diddy,” on the other hand, is taken at a breakneck pace, and the Houserockers make it their own. It provides a strong way to end the two-disc set.

Grushecky provides a brief liner note essay that – in case anyone was wondering – underscores just how much he and his musical associates had a good time making Have a Good Time … But Get Out Alive! Chances are good that if you’re the sort to have read this far, you’ll enjoy it nearly as much.