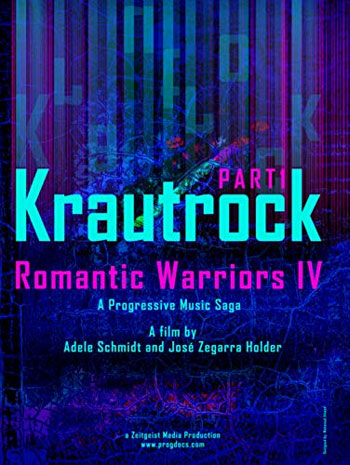 The term krautrock may just be one of those labels that is meaningful only to those who exist inside a kind of bubble. The person on the street, so to speak, is unlikely to have ever heard the term, much less to know what it represents. Very loosely defined, krautrock is the rock music that came out of Germany in the very late 1960s and ‘70s that possessed a uniquely German character. It’s not Scorpions and it’s not Rammstein. It is, however, Can, Faust, Neu! and Kraftwerk. True, those bands often don’t sound at all like each other, but their groundbreaking approaches to music earn them the label nonetheless.

A new documentary, Krautrock: Romantic Warriors IV (Part 1) attempts to explore the phenomenon, place it into historical context and showcase its leading lights. With a runtime in excess of two hours, one might expect that the documentary would take a deep-dive approach. And indeed it does, constructing a narrative based on first-person interviews with important figures in the movement, music performances and archival sounds and visuals.

But the creators of the documentary understand full well that the subject is simply too expansive for a single documentary. So while Romantic Warriors IV is in fact the fourth full-length film in a series to focuses upon progressive rock in general, it’s also the first of a three-part series covering the German side of the genre.

Earlier volumes in the series from Adele Schmidt and José Zegarra Holder explore the current (as of 2010, when it was released) progressive rock scene – primarily but not exclusively – in the U.S. Even a seasoned prog fan such as myself will admit to having heard of exactly one of the ten bands profiled, and then only having a vague sense of what that group is about.

But then, that’s sort of the point: showing interested viewers just how vibrant a scene does exist just beyond their awareness. The second volume explores “rock in opposition,” the most uncompromising and difficult of progressive music’s subgenres. This ain’t Yes or Genesis we’re talking about here: instead, the avant garde acts profiled in Romantic Warriors II include Christian Vander of Magma, a band so out-there that it has its own language. (My own extensive interview with Vander ranks among my most treasured interactions as music journalist.)

The third volume concerns itself with the jazz-inflected, often whimsical Canterbury variant of progressive rock. I haven’t seen it, but very much look forward to doing so: it focuses on Caravan, one of my all-time favorite groups, as well as a host of other names that rank among the most well-known in the genre (Soft Machine, Gong, Egg, Matching Mole, Hatfield and the North, National Health, Quiet Sun etc.). Even if you don’t recognize those names, trust that they’re all important players in the nexus where exploratory jazz and a skewed pop sensibility intersect.

Which, finally, brings us back to Romantic Warriors IV and the krautrock scene. There’s so much to cover there that this volume focuses upon Dusseldorf, Cologne and Hamburg acts. On-screen appearances by the major players in Can, Harmonia, Kraftwerk, Neu! and others. There’s no narration; instead, the words of the participants – combined with music from the glory days as well as current footage – tells the story.

For those with some (but not extensive) interest and immersion into krautrock, the film offers quite a few surprises. Placed into the proper context, a lot of the music chronicled seems more accessible than it might otherwise. The insistent motorik of Neu! is hypnotic, and the often wordless vocalizing of Can’s Damo Suzuki somehow starts to make a kind of sense. Time spent with Romantic Warriors IV will almost certainly lead the viewer to seek out more of this music. (If you haven’t yet heard them, I’d suggest Can’s Future Days and the entirety of Kraftwerk’s Autobahn as ready entry points.)

I’ll admit that I was looking forward to learning more about Amon Düül II, but they’ll be covered in an upcoming volume. And because the subject is so expansive, even a documentary series like this isn’t likely to hit all the points: nowhere in the production company’s literature do I see any mention of plans to cover Grobschnitt, my all-time favorite German group. But that’s no indictment of this excellent series; the filmmakers do a fine job as it is.

I do have one very minor critique of Romantic Warriors IV, however. As is sadly too typical, I’m an American who speaks only English (small bits of Spanish and Portuguese notwithstanding). That means that I’m often set adrift while screening the documentary; several long passages – in particular those covering the fascinating Floh de Cologne – are completely in German. “Oh,” I can hear you saying, “You could turn on the closed-captioning?” Well, yes. But since plenty of the film features English speakers, the onscreen captions get in the way. Were there a way to have captioning display only when the speakers aren’t using English, watching the film would be a smoother experience.

But the skill in which the film is put together – coupled with the compelling subject matter – makes any minor inconvenience such as that unimportant. Krautrock: Romantic Warriors IV occupies a special place in the world of music documentaries. It shines a light on fascinating, deeply creative (and even life-affirming) music that most listeners know little of. It’s important work, and I for one enthusiastically await the next volume in the ongoing series.