Midwestern rockers REO Speedwagon had been together for more than 13 years before the band scored its first top ten single. That song, “Keep On Lovin’ You” marked a new beginning for the group. And REO Speedwagon’s durability has been proven over and over again ever since: nearly 40 years after that single (and several others from the blockbuster LP Hi Infidelity) ruled the charts, the band continues to tour and play in front of enthusiastic audiences.

Bassist Bruce Hall joined the band in 1977, in time to play on sessions for the album You Can Tune a Piano, But You Can’t Tuna Fish. He says that to this day he jokes with his band mates about it. “I’m always telling the guys that as soon as I joined the band, everything started happening,” he says with a chuckle. “But it’s not true.” 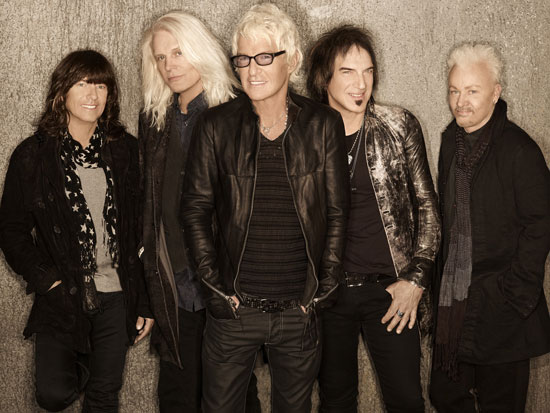 Hall says that his entry did coincide with the band making a collective decision to write songs with hit potential. He explains that songs from REO’s first several albums gained airplay on college radio stations. “But in order to have a career, we started thinking about getting on AM radio so that we could get wider distribution and play in the big leagues,” he says.

That meant sharpening the group’s songwriting. “Tighter arrangements, not too much jamming in the middle … that sort of thing,” Hall says. “There was a conscious effort; we wanted this thing to last, and we needed some hit songs in order for that to happen. And I think we did that.”

The proof of concept came with the release of Hi Infidelity. The band’s ninth album stormed the U.S. charts all the way to the number one spot, eventually earning Diamond certification (10 million units sold). Hi Infidelity featured no less than six singles, four of which made it into the Top 40. The album also sold in droves in Canada and the U.K., establishing an international following for the previously regional act.

Even before the record as released Hall and his band mates knew they had made the kind of record they wanted. “We knew it was going to be a good record,” he says, “but I don’t think anybody knew it was going to take off like a rocket ship and take us out to another place. It was a surprise to everybody.”

It helped that a new pop culture phenomenon came on the scene just a few months after the release of Hi Infidelity. MTV brought music videos to a ready audience, and – unlike many of the band’s contemporaries – REO Speedwagon managed to make the successful leap into the video music era. “We were hot as a pistol at the time,” Hall recalls. “So they came to us with the idea of making videos and putting them on.”

And because MTV was so new, many bands hadn’t yet sensed the commercial potential that music videos represented. “Not all that many groups had really gotten on the bandwagon yet,” Hall says. “So the videos of ours that MTV had in their rotation, the just played over and over again!”

REO Speedwagon took full advantage of its newfound fame, going on to release a string of popular albums through the 1980s. And even when tastes changed and the hits stopped coming, the band succeeded with a number of compilations and greatest-hits albums, touring with a set heavy on the hit material.

Today the band continues to tour, with a lineup that hasn’t changed in 30 years. In addition to Hall, REO Speedwagon features keyboardist and founding member Neal Doughty, lead singer and multi-instrumentalist Kevin Cronin, guitarist Dave Amato and drummer Bryan Hitt. Asked about the secret to the band’s stability in an era when many other legacy acts soldier on with a revolving door lineup, Hall has a straightforward answer. “We respect each other and we love each other like brothers,” he says. “We don’t mind being together. We travel on a bus all the time and we love to make music together. I think all of us feel very fortunate to have each other and to have this band. And there’s no reason not to enjoy it.”