There’s a spiritual, almost mystical quality to the drumming of multi-genre musician Jeff Sipe. A world-traveled musician with an extensive body of work to his name. He has performed and played with some of music’s most innovative and boundary-pushing artists, yet he’s equally at home in an informal living room jam with friends.

Though he’s played professionally in most every style of music, Sipe’s primary work is in the jazz fusion genre. His interest in that music began when he attended high school in Virginia. “The school had a jazz band, and I was really interested in joining,” Sipe says. “But I wasn’t good enough.” A friend turned him on to the music of Miles Davis; Sipe was immediately hooked. “That was my awakening into American jazz,” he says. “A door opened up for me.” 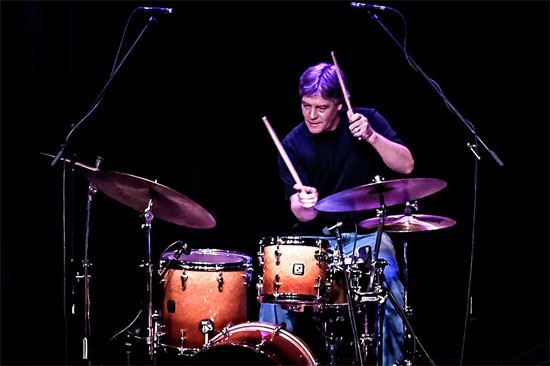 Sipe stepped through that door, keeping his ears open for other sources of inspiration. He found that in the drumming of Carl Palmer of progressive rock trio ELP, and in jazz drummer Billy Cobham. Sipe studied hard and quickly developed the musical “chops” necessary to play the demanding kind of music he loved.

But – like his heroes – Sipe’s approach isn’t bloodless and technical; it’s equal parts precision and emotion. “Each genre has its vocabulary and its technical demands,” he explains. “If you’re playing jazz or classical, you’ve got to practice nonstop because the technique is so demanding and the vocabulary is so vast.” He allows that other genres are less technically demanding, “more of a feel good thing than an intellectual endeavor,” he says. But Sipe finds them equally fulfilling.

After studying at the Berklee College of Music in Boston, Sipe relocated to Atlanta. There he soon fell in with iconoclastic band leader Col. Bruce Hampton. “Everybody who graduated from the ‘Hampton bootcamp of music’ was touched by his philosophy,” Sipe says of the late musician. “Why we were doing it was as important as what we were doing.” Sipe remained with Hampton’s band, the genre-blurring fusion group Aquarium Rescue Unit until its first breakup in 1997, and returned when the band reunited in the 21st century.

But Sipe’s musical interests and activities had always extended beyond Hampton’s adventurous musical collective. He toured and recorded as a member of Jazz is Dead and cajun/bluegrass band Leftover Salmon. And by 2005 Sipe began making recordings under his own name, working with friends he had made through his own musical travels. He has also lent his versatile talent to recordings by Susan Tedeschi, the Steep Canyon Rangers, Phish’s Trey Anastasio and many others. And Sipe’s drumming is always exactly what each project requires.

“I consider myself an American drummer,” Sipe says. “I’m self-employed, and that demands that you have to play more than a couple of styles just to be able to make a living. But I’m lucky, because I’m passionate about it and I love all the styles.” He’s currently putting the finishing touches on a book about drumming, equal parts philosophy, narrative and instructive text.

Last year, Jeff Sipe’s winning combination of emotion-filled and precise drumming led him to perhaps his most high-profile gig to date. Working alongside longtime friend and band mate Jimmy Herring, Sipe took part in the “Meeting of the Spirits” concert tour featuring pioneering fusion guitarist John McLaughlin. He treasures the memories from what was billed as McLaughlin’s farewell to touring. “It was just wonderful to be in the presence of such an elevated musician and person,” Sipe says. “Because his dealings with us were so gentle, inspired and positive.”

Sipe’s current project is Electric Buddha, a psychedelic funk-rock band he describes as “a throwback to the ‘60s but with modern sensibilities.” The group features all WNC-based musicians: Hendersonville-based guitarist Howie Johnson plus Mike Barnes (guitar), Derrick Gardner (keyboards), Mark McDaniel (bass) and vocalist-guitarist Melissa Reaves. Electric Buddha is yet another vehicle through which Sipe channels his mystical vibes. “It’s a great band of wonderful, sweet human beings,” Sipe says. “We have a great time playing together.”