Everybody Knows Your Name: Archetype Brewing

Fourth in a five-part series

In a city filled with breweries and brewpubs – more than 30 at last count – it takes some effort to stand out. Located in the “East West Asheville” area known as Beacham’s Curve, Archetype Brewing opened in 2017 with an express goal of being a neighborhood bar. The brewery was so successful that a second location was added in February 2019. Like the original location, the new and larger space on Broadway St. just north of Moog Music has a distinctly local and family-friendly vibe. 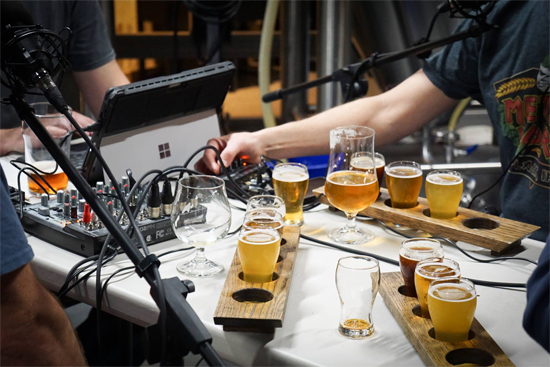 The Broadway location also features an event space. That 80-person room – with its own sound system, stage, lights and projection system – allows the pub to feature live music, spoken word events and other entertainment. “We do a bluegrass jam in there every Monday,” says Sally Tanner, Archetype’s marketing manager. “And we have square dancing in the fall and winter.” The West Asheville location has a weekly jam as well, and features “post-brunch blues on Sundays,” she says.

The Asheville Improv Collective makes Archetype on Broadway its home for monthly events as well. “We do a lot of rehearsal dinners and other private events here too,” Tanner says. “It’s perfect for that, because they can close the door and have the space to themselves.”

Archetype focuses primarily on serving its own beers, modeled upon Belgian open fermentation methods. But the pub offers wine, cider and non-alcoholic beverages as well. At the Broadway location, food is limited to pretzels and popcorn, though a rotation of food trucks is being considered for the future.

Tanner says that from the start, owner-brewers Steve Anan and Brad Casanova – both formerly of Hi-Wire Brewing – “really wanted Archetype to be a spot for the neighborhood.” Both brewpubs are close to downtown, but their locations – adjacent to the Hall Fletcher and Montford neighborhoods – give local flavor. “We see the same faces in and out all the time,” Tanner says. But she reports that plenty of tourists find there way there as well; they represent about half of the traffic through the two locations.

Archetype manages to be uniquely local-focused while showcasing for visitors the qualities that make Asheville special, Tanner believes. “Our focus on community, that’s an Asheville thing.”