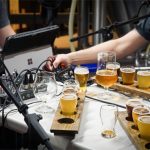 Fourth in a five-part series In a city filled with breweries and brewpubs – more than 30 at last count – it takes some effort to stand out. Located in the “East West Asheville” area known as Beacham’s Curve, Archetype Brewing opened in 2017 with an express goal of being a neighborhood bar. The brewery
Read More