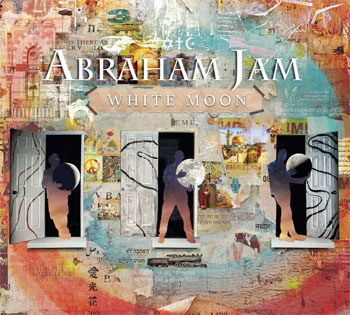 Customarily, when multiple artists each having his or her own successful career come together, it’s for one of two reasons. They might collaborate simply because it’s fun, because it gives them a chance to step outside whatever stylistic box they may be in, because they’re up for what used to be known colloquially as a busman’s holiday. The other reason that established musicians team up is to do something special, something that is greater than the sum of its parts.

In all likelihood, Abraham Jam is the product of both kinds of motivation. To be sure, none of the three “needs” another project; each has a thriving and creatively fulfilling musical path all his own. Asheville-based Billy Jonas is a multi-instrumentalist with many albums to his credit; he often works with re-purposed items, making musical instruments out of materials not designed as such. A key portion of his work centers around family entertainment, though much of his catalog is aimed at a general audience.

Born in Canada, Dawud Wharnsby is a songwriter with more than a dozen albums, and a poet who has published five anthologies of his work. Ashevillian David LaMotte is a breathtakingly busy musician and songwriter who also finds time to write books, schedule public speaking appearances and travel the world in support of those endeavors.

In 2010 LaMotte was also working with the North Carolina Council of Churches. It was there that he conceived the concept of Abraham Jam. A Christian, he’s now teamed up musically with Jonas (a Jew) and Wharnsby, an adherent of the Muslim faith. Together they make music that celebrates and encourages harmony and unity among the three Abrahamic faiths.

Leveraging the popularity of all three musicians – and building on the anticipation of a collaborative venture – Abraham Jam launched a Kickstarter campaign. That effort raised more than $48,000, and the tangible result of the campaign would be not one but two album releases.

Customarily, a new act makes a studio album or two (or more) before documenting a concert in the form of a live album. But because it captures the essence of the trio so effectively, Abraham Jam Live was the debut release in 2018. And demonstrating that the creative well from which the three draw is a deep one, the newest Abraham Jam album, White Moon, is a studio release that features all new material. Only one of its eleven songs (most of which are band originals) appeared on the live set.

As one would rightly expect, the songs on White Moon are inspirational, positive, uplifting and upbeat. The songs make good use of the instrumental strengths of all three musicians, and combine the air and ambiance of the traditional musical styles that are a part of their respective faiths. Vocal harmonies further the lyrical messages of harmony. The songs celebrate the values that unite the three different religions, but not in a way that dilutes the core values of each.

Middle Eastern textures of the title track are contrasted with the gospel-meets-reggae feel of “Love is the Seventh Wave,” and the group members’ ties to Appalachia shine through on the acoustic “Jerusalem.” The three vocalists allow their voices to wrap around each other in dramatic fashion in the aptly titled “Braided Prayer.” Singer-songwriter values are on display on “More Love (Karleigh’s Song).”

The song titles on White Moon telegraph the demeanor of the album: “Song of Peace,” “Rhythm of Surrender,” “Child’s Prayer.” A spoken-word introduction to the subtly funky “Drink Deeply” quotes from the Persian poet and mystic Rumi.

After making it plain that the trio has no shortage of original ideas that support its core message of what Wharnsby describes as “sing[ing] our world’s ongoing story together,” Abraham Jam wraps up its first studio album with a medley. Pairing “Peace Train” by Cat Stevens (aka Yusuf Islam) and Curtis Mayfield’s gospel-soul classic “People Get Ready” is inspired on a number of levels. Both songs make use of the image of a train to convey a kind of universal brother- and sisterhood. And although Stevens and Mayfield themselves wrote from different faith perspectives, their songs fit together seamlessly. Even without the stirring words, that fact brings home the central message of unity that lies at the heart of White Moon.