Michael Franti is well known for many things: The Oakland-born musician is a guitarist, rapper, songwriter and poet. He’s also renowned for his activism and commitment to social change, world peace and environmental issues; his activism and musical pursuits have long been intertwined. The artist combined music and activism yet again when he came to Asheville in July 2019: Michael Franti & Spearhead’s July 18 concert at Salvage Station was a benefit for Western North Carolina environmental and conservation nonprofit MountainTrue. 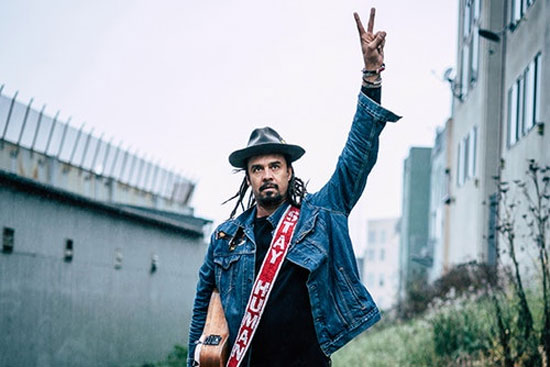 MountainTrue is “the primary protector and defender of the French Broad River watershed,” according to its website. Franti says that Salvage Station is the ideal location for the benefit concert  because it’s situated “right along a river that […] has a history of not such great environmental practices” yet is vitally important to the community.

Franti is a frequent visitor to Asheville and a popular concert draw. “It’s a bastion of progressive politics and creative people,” he says, noting that he tries to visit one of the city’s hot yoga centers whenever he’s town. “Asheville’s a place that is really inspiring to people all around the country.”

The concert was Franti’s second benefit for MountainTrue. He says that locally-focused initiatives can have an advantage over national or global projects. By way of example, he says, “A lot of times when we look at the issue of human-caused climate change, we go on these big-picture things that are really hard to understand: billions of tons of carbon in the air and stuff like that. It’s hard to get your head around it.”

Franti believes that grassroots, ground-level issues can resonate more deeply with people. “When you see the river and there’s foam or tires or a shopping cart in it, that makes [the issue] so much more concrete. So that’s why we love supporting local organizations who are doing great stuff.”

He admits that sometimes, his fans look to him for cues regarding which causes to support. “But I prefer that rather than me telling people who they should support, that people take on the idea that’s it’s good to be on the side of the planet, on the side of teachers and educators,” he says.

“I want people to base their decisions on their heart and their connection to people and the planet more than I want to tell people who to vote for or what organizations to support,” he says.

For his part, because there’s so much work to be done on issues of peace, justice and environmental causes, Franti recognizes that choosing activist organizations to support can be a challenge. “We get approached by tons of groups,” he says. The decision often comes down to a few factors. “Part of it is our bandwidth,” he says, “and part of it is how organized the group is in getting an event together that will have impact.”

But ultimately, Franti chooses to lend his name and support to efforts backed by passion. “At the end of the day, it’s just [about] finding people who are passionate about the same things that I am, and who are doing things that have local and immediate impact.”

He has definite ideas as to why music and musicians can be such a powerful force for good. “Music is the sound of feelings,” he says. “Music is what feelings sound like. A politician can come onstage and read off statistics or whatever, but if [someone] tells you a story that makes you feel something about life that you connect with, they’re going to be more effective in what they do.”

Franti says that music really does resonates with people. “It does that literally, on a cellular level,” he says. “When we hear or feel a bass line, it’s passing through our body; it’s vibrating everything that’s around us. And if it makes you feel good, it’s changing you in that moment.” Paired with lyrics that deliver a message, the result can be life-changing.

He isn’t dissuaded in his efforts by those who would suggest musicians should stay away from activism. “I grew up in a family where every single one of us five kids was taught to be civic-minded,” Franti says. “If there was something you saw that was wrong, you were supposed to speak up about it. And if there are things going right, the same thing: you should be singing those praises.”

While the health of the French Broad River watershed was his focus issue for the Asheville concert, Franti says that he wants to be on the right side of history no matter what the cause. Mentioning current news reports about immigrant children being held in detainment camps, he says, “When my grandkids ask me, ‘What were you doing?’ I want to be able to say, ‘This was something that I was against, and I was vocal about it.’”