Marley Carroll: Call of the Wild

Marley Carroll is a busy and well-known DJ who spins music from an eclectic assortment of styles and genres in clubs in and around Asheville. But Carroll is also an accomplished electronic musician and composer, with a catalog that includes many singles and remix projects as well as three full-length solo albums. His newest album, Flight Patterns, builds upon the creative successes of his past recordings and makes use of the skills he’s honed as a DJ. 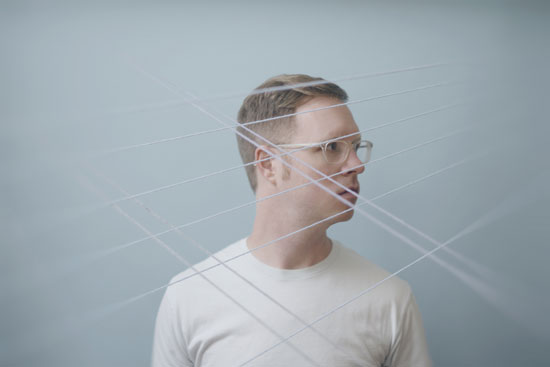 At age 16, Carroll took part in a DJ battle hosted in Charlotte. “I started getting into turntablism and scratching when I was really young,” he says. “I’d only been DJing for about a year.” He won that competition. “If that hadn’t happened, I’m not sure how seriously I would’ve taken DJing,” he says. “You kind of get a pat on the back at a young age, and you start to realize that there’s something there.” Carroll went on to college on a drum scholarship, switching to music technology. All of those experiences colored his approach to making his own music.

Listening to Carroll’s first two albums – his 2007 debut, Melanaster and 2013’s Sings – one can identify some of his influences fairly easily. Some songs display hints of Massive Attack’s trip-hop style, while others lean in a more electronica direction. As solid a collection as it is, Melanaster is a bit of a sonic grab-bag, the sound of a young Carroll searching for his signature style.

“On the first album, I was still really unsure of where I landed,” Carroll admits. “There are a couple of straight-up rock songs with wah-wah guitar.” He believes that Sings hangs together better as a collection of songs, “but still there’s ‘Hold Your Wings,’ which is a shoegaze rock song.”

Carroll explains that because his interests are so wide-ranging – a quality that serves him well in his role as a DJ – his original music can be all over the stylistic map. “I like making just straight ahead singer-songwriter stuff, and I like making really tweaky, techno stuff,” he says. “So when it comes time for me to finalize something, I’ve found it difficult to find a consistent voice.”

But Carroll has found that distinctive voice with Flight Patterns. He has combined the various styles that resonate with him into a work more unified than anything he’s done in the past. “It’s the first album where I’ve actually aimed for some kind of sonic consistency all the way through,” Carroll admits.

He usually works alone in the studio, largely using software, plugins, sampling and other state-of-the-art tools to create his music. But Carroll does use some non-virtual gear as well, including a Moog Sub 37 analog synthesizer and a few other machines. “I don’t have that much hardware,” he says. “I’ve got some guitars, and I’ve got some funny miniature drum machine things and cheap keyboards.”

But it’s the computer that remains Carroll’s favored musical tool. “I really like getting the most from what the laptop computer can do,” he says. “There’s something about the simplicity of having it all unified, rather than having a whole bunch of hardware everywhere with spaghetti cables and routings and all that stuff.”

Yet despite the technological nature of his musical tools, Carroll doesn’t identify at all with the EDM movement. “Nothing against it,” he emphasizes. “I’m fine with being genre-fluid, not really being pinned down.” Still, he’s modest about what he does. “I don’t think I’m reinventing a particular style or genre or anything,” he says.

The computerized origin of Carroll’s music is offset to a large degree by the organic feel of the songs on Flight Patterns. “I feel connected to Western North Carolina as a region and environment,” he says. His East Asheville home studio is surrounded by woods, and the noisy crows in nearby trees exerted an influence on his work. “I started listening to them and started noticing what they were doing,” he says. “And that was the entry point for becoming obsessed with birds.” He made a point of learning the call of all of the bird species near his home.

The results of his obsession range from the obvious – song titles like “Starlings,” “Seven Crows” and “Migration” – to more subtle qualities like the placid, hypnotic and soaring textures found in tracks like “Fireflies.”

Carroll acknowledges that his approach to making music is a solitary pursuit. “That sort of introspection has always been really important in my life,” he says. But he’s no hermit; Carroll is a regular fixture of local “Lose Yourself to Dance” parties in which he guides the emotional tone of a room via song selection and sequencing. “DJing is sort of like my day job,” he says. “I really enjoy it. And I think that those DJ skills do compliment my original music.”