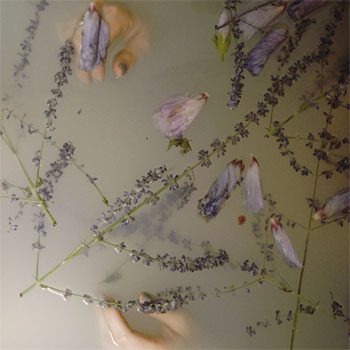 A sense of humor is not typically at the top of a list of notable characteristic of a singer-songwriter. By definition—and with some exceptions, of course—singer-songwriters tend to be a serious, introspective lot, rarely given over to playful subject matter in their work. But Asheville-based artist Lavender Blue (the stage name for Kayla Zuskin) has it both ways: the songs on Dusk, her first full-length release, are emotionally rich and evocative, but Zuskin’s subtle wit flashes now and then as well.

The main case in point is the album’s lead-off track, “Give Me Metal or Give Me Death.” To a listener unfamiliar with Lavender Blue’s work, that title might suggest a jagged, abrasive tune full of aggression and (perhaps) a bit of humor. But the song itself has none of those qualities. It’s a poetic rumination on pain, uncertainty and love. Zuskin displays a sophisticated command of language; the couplet “The poison runs deep / singing antidotes in our sleep” makes clever use of the confusion some have between the words antidote and anecdote; the thing is, in this song’s context, either works. The song’s spare and lilting arrangement is a showcase for Zuskin’s breathy vocal delivery, and Mike Johnson’s subtle pedal steel work adds just the right texture.

“Jellyfish” features Zuskin’s shimmering yet understated guitar as its central instrument, though Jack Victor’s drums are mixed way out front. As the melody tumbles into its brief chorus, a strong shoegaze character reveals itself; were it not for the angular major-7th chords that surface through the track, “Jellyfish” might be thought of as a distant cousin to the Sundays’ “Here’s Where the Story Ends.” The arrangement threatens to explode into a rock feel, but Zuskin and her musical associates pull back from that edge just in time; the tension created in the process makes the song a successful one.

The moody “Pennies” exhibits some of the same qualities, but leaves out the threat of rocking out. Instead, Zuskin effortlessly explores the upper register of her vocal range, adding subtle splashes of chiming guitar.

“Just Kids” is built atop a synthesizer foundation played by producer Johnson. The song’s character straddles synthpop and downtempo; in places it’s so placid that it evokes thoughts of Brian Eno’s impressionistic Another Green World tracks. That understated demeanor is carried through on the wordless “BlueBlood RedMoon,” though here it’s gently picked guitar and washes of sound effects that conjure the mood.

“Negev” marks the appearance of unamplified acoustic guitar that has a character not unlike a harp or dulcimer. Melodically less accessible than most of the other tracks on Dusk, “Negev” has a free-form feel; the song sounds more like an introduction than anything else, but in the end it stands on its own, not actually introducing anything else.

A vaguely countrified guitar figure carries “Tricksters” forward. Corey Parlamento’s bass is assured yet quiet; Sister Ivy’s Rachel Waterhouse provides some washes of electric organ and an alluring solo, one of few solos on the record. The album closes with the dreamy “Dead Horse Point.” Like each of the eight tracks on Dusk, it has a specific characteristic that sets it apart; in this case it’s the song’s use of overdubbed vocal lines that overlap and intertwine. And at a shade over five minutes this, the album’s longest track provides an opportunity for Zuskin to spin out a simple yet appealing electric guitar solo.

At right around 30 minutes, Dusk certainly isn’t an epic-length recording. But the eight songs on Lavender Blue’s debut album provide a good overview of the varied yet cohesive musical perspective of Kayla Zuskin.