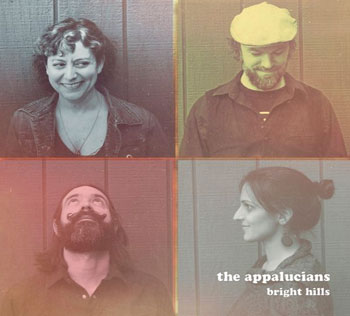 Bright Hills, the debut album from Asheville-based folk quartet the Appalucians, reveals a charming and close-knit vibe within seconds of its opening track. Two of the group members – bassist/harpist Aditi Sethi and guitarist Angie Heimann – engage in a dual-lead harmony vocal on “Bloom in the Seed.” The two allow their vocal lines to wrap around each other, always remaining within the confines of harmony yet bounding around effortlessly within that context to create a sound that’s somehow both precise and relaxed.

“Bloom in the Seed” effectively sets the tone for the album. All but one of the 14 original compositions on Bright Hills were written either by Heimann or her husband, guitarist Jay Brown. Sethi’s husband, guitarist Cas Sochacki, rounds out the quartet. The instrumentation on the songs generally stays within the folk and Americana idioms: acoustic and resophonic guitars, harmonica and so forth. But the group’s classic pop songwriting influences filter through to the choice of instruments, too: electric piano and electric bass guitar are used judiciously within the songs.

But as fine and note-perfect as the playing is throughout Bright Hills, it’s the vocal blend that is most likely to win the hearts and minds of listeners. Heimann and Sethi’s voices seem custom-made to work as a team. There’s a playful tone in songs like “47 Main” that’s irresistibly appealing.

The two female singer-musicians don’t hog the spotlight, though; Jay Brown steps forward for the lead vocal on his own “Champagne Annie,” a breezy, catchy story-song in the tradition of the best country-rock hybrids from acts like Flying Burrito Brothers and Poco. The dueling lead guitar lines are effective, too making “Champagne Annie” sound like a hit single.

With the subtle and buttery tones of a Fender Rhodes piano, The two-step vibe of “Breakin’ Even and Breakin’” sounds like a nod to the country of 1970s AM radio. Heimann’s contemplative “Farmtown Waltz” is a melancholy piece brightened by the songwriter’s crystalline, edge-of-heartbreak vocal delivery. “Smokin’ Ashes” is another heaping helping of classic country; its melodic line may be familiar to the point of predictability, but the song’s homespun charms and sincere delivery outweigh the shopworn nature of the melody.

Brown’s “Adibelle” is – one suspects – a love song to his partner. It’s also a showcase for more lovely harmony singing, this time of the male/female variety. Sethi initially takes the solo lead vocal on “Rhythm in the Wind,” a tune with a relatively unconventional (in this context) melody; it has a distinctly Eastern feel, underscored by the tabla work of guest artist Avi Chopra.

Heimann’s punningly titled “Hailbop” is a softly sung, plaintive mountain melody. A love song referencing one of the brightest comets to pass near Earth, it’s followed by “Ketchikan,” a tune with a picked guitar melody reminiscent of Arlo Gurthrie’s style (and wordplay that recalls Guthrie’s approach as well).

Cas Sochacki sings baritone lead on his songwriting contribution to the record. Stylistically, “Don’t Bother Me” is an outlier on Bright Hills, but it’s fun nonetheless. What it has in common with the disc’s other songs is its displaying of the sheer enjoyment the musicians have in making music together. “One Man Woman” is an original, but it’s such an effective capturing of the easygoing pop-country aesthetic that it feels like a cover of a classic.

The a cappella harmonies that introduce “Sweet Later On” preview a more serious and thoughtful side of the Appalucians. The song balances the lighthearted moments nicely, rounding out a warm and inviting collection of songs. Bright Hills is a strong debut, one that effectively showcases the strengths of the quartet.