The Paradox of Ghost

Arising out of Sweden’s vibrant metal scene in 2006, Ghost has carved out a unique place in the rock landscape. Fronted by songwriter and vocalist Tobias Forge, the band is populated by musicians known only as Nameless Ghouls (Forge’s identity was only revealed in 2017). Wedding showmanship in the tradition of Alice Cooper to a finely-honed and highly polished musicality, Ghost brings together the best qualities of hard rock and theater.

The first thing most will notice about Ghost is the band’s visual aesthetic. The Nameless Ghouls wear masks and uniforms. Until recently, Forge performed in character as Papa Emeritus and Cardinal Copia, appearing onstage in mock-papal vestments festooned with inverted crosses. But while the anti-organized religion stance is genuine, Ghost’s collective demonic persona is as much show business as anything else; ultimately it’s all in service to the delivery of the band’s music. Like a stage play, Ghost’s music is designed to be emotionally manipulative. 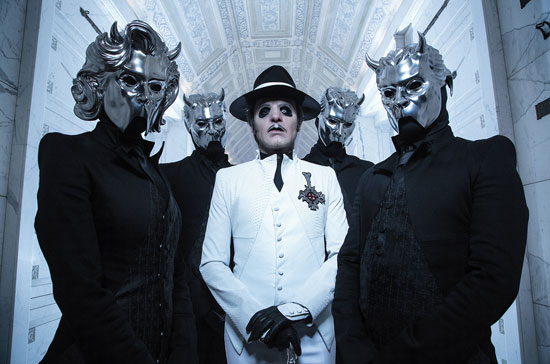 “I want people to come to our show and have a cleansing,” Forge explains. “I want them predominantly to laugh and feel joy, but maybe even cry a little.” The goal is for concertgoers to experience a full range of emotions. “There’s that heavy element – one that that heavy metallers know – where there’s a little bit of aggression, and I want that to be represented, too,” he says. “And at the end of the show, I want people to feel euphoric; I want them to go from the show having life affirmed.”

A Ghost concert, then, is a sort of communal event, one that’s inviting to those who feel socially disenfranchised. “Heavy metal, rock, goth and emo all have a tendency to be a magnet for persons – boys and girls – who are rather on the outside socially,” Forge observes. “I want them to find strength – not only through my music, but from all the things life has to offer – to make them feel better about themselves and want to live, prosper, and do something.”

Onstage, Ghost’s Nameless Ghouls – a few guitarists, a couple of keyboardists, a bassist and drummer – deliver the musical firepower while Forge struts about the stage with finesse. Even though the show is meticulously choreographed, he engages with the audience. Stage performance is always in his mind when the songs are first being written, Forge says. “I have a great deal of consideration for how they’re going to be executed live.”

Sometimes Forge might even avoid writing in a certain style because it isn’t likely to fit into the stage show. “I’m like, ‘Ah, this part here, it won’t sound good live.’ There will be a drop in intensity there or the colors move in a wrong way.” He laughs and mentions a self-indulgent song immortalized in the 1982 film This is Spinal Tap. “If you want to do a really proggy, odd time signature, 19-minute, weird, ‘Jazz Odyssey,’ it’s fun to play and it’s fun to record,” he says. “But it might not be very pleasant to listen to. And you might lose the crowd there.”

Holding the attention of the audience is something that Ghost does exceedingly well. The band balances musicianship and spectacle. “The music is written in a way that doesn’t allow for a lot of improvisation,” Forge admits. “But I think that it’s important that [the music is] not only correct; I prefer it if there’s a little bit of a swagger and style in playing.”

Coupled with the anonymity of Ghost’s members, Forge’s vision for the band means that the lineup can (and does) change. Other than Tobias Forge, none of the current musicians (two of which likely are female) has been with Ghost more than a year or two.

And Forge happily concedes that what Ghost does onstage is as much acting as it is playing music. “Obviously, we’re following a script, but you can effect dramatic changes depending on the actor,” he says. “Even though they’re performing the same line – even though I dictated what you are going to say – you’ll get a different result depending on the actor.” The overall desired result is clear. “I want to contribute in any way to make people feel very happy about themselves,” Forge says.

Stay tuned for a second featured based on more of my conversation with Ghost’s Tobias Forge.