The Struts Under Pressure, Part One

The Struts burst onto the American scene in 2016 with a retooled version of their then two-year-old debut album, Everybody Wants. Combining an arena-rock musical approach with glam swagger, the Struts evoke the sound and feel of a bygone rock era. But they’re more than a Queen retread; their anthemic songs strike a chord with modern audiences.

There was an unusually long gap between the release of the revised Everybody Wants (March 2016) and the long-awaited follow-up, Young & Dangerous (out October 26, 2018). In fact, as the band kicked off its North American tour, the new album was still several weeks from release.

I first saw the Struts in December 2016, on their first U.S. tour; I was interested to see what changes two years had wrought upon the group. After the sound check for their October 10 concert at Asheville N.C.’s Orange Peel, I spent some time backstage with singer Luke Spiller and guitarist Adam Slack. We chatted about the long wait between records, the advantages of Dave Grohl being a fan, and how to work a crowd. 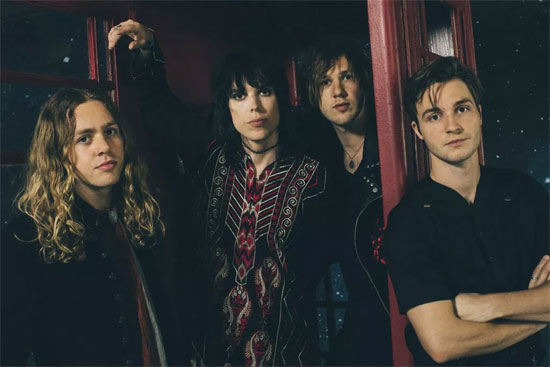 Young & Dangerous isn’t out yet, but the band has been rolling out new songs ahead of its release. Was there a conscious effort to write songs that are consistent with the sound and feel of the last album, or were you trying to do something different?

Luke Spiller: We definitely decided to progress. We wanted to create something that was joyful and a lot like the first, but we also wanted to push forward as well, if that makes sense.

Adam Slack: We wanted to make something that was similar to the first, but push it in a new way … like, try it with different sounds in the studio, and different synths. We don’t want to stray too far away because we didn’t want to alienate our fans or anything like that. But at the same time, we didn’t want to just reinvent the wheel …

Adam: We wrote a lot of music off the first album a long time ago. So, we’ve grown as writers as well.

Did you feel pressure to come up with an album to follow on from the success of the first one?

Luke: Especially after the reissue of the first, because the English issue – let’s call it “the original original” – was good, but when we signed with Interscope and we added four or five new songs. And it was just like, “Wow. This is so much more stronger.” Everything was finished, recording-wise, unlike the very first. So, from that moment on, it was in the back of everyone’s head that this is definitely going to be tough to follow up. Yeah, some of the writing actually even started earlier. “One Night Only” [released 2017] was going to be on the new album, but it was just one of those things where we really needed to get a song out there. So we put that one out just to kind of keep fans interested, and now it’s kind of like a bridge track. I mean, it was very, very tough.

Adam: We kicked off 2017 in the studio writing and stuff. We were working with loads of different people and none of it was clicking, and that’s what kind of made the pressure even more. It was like, “Shit. We’re three months into writing a second album and we’ve got fuck-all.”

Luke: We couldn’t get the right producer, the right chemistry. We were kind of just being yes-men for about three months. I mean, look, we wanted to please everyone; we wanted to trust in a lot of people’s advice. And to be fair, there were some great people that we found from those suggestions. Like Butch Walker, for example, and Jon Levine, another guy who really has given us great new sound, which features on this second album. But yeah, the first three months were painful.

When I last interviewed you in December ‘16, you were talking about how you had some time set aside to start writing. And there’s no delicate way to ask this: It’s been a fairly long period of time between the albums. Was that really just down to really not having the right chemistry?

Luke: Well, firstly, we don’t write on the road.

Aha. And you’re on the road a lot.

Luke: So, you do the math. I’m not not saying nothing happens on the road, but once you kind of get a feel of what the schedule is and the things that we do for our fans … for example, it takes up a lot of our time between the meet-and-greet, and we love having a good soundcheck as well, and we always capitalize on that time. I mean, honestly, there’s probably only a few hours in the day where you kind of want to eat, or wash, et cetera. And there’s so much for us to do. We’ve got to get ready, do the makeup, get our outfits all sorted …

Adam: And we didn’t want to tour. Other than the Foo Fighters [opening gig] that came later on in the year, we went on a tour in the summertime. And that was right in the middle of … we just wrote one or two songs and we were like, “Finally, now we know what we’re doing,” and then it was like, “Now you’ve got to go on tour for six weeks.” It was broken up like that

But the Foo Fighters tour was amazing. You can’t say no to that. So we managed to squeeze it all in, and then we finished the album off at the start of this year. And I can’t believe it’s fucking October already!

Luke: To make things even more difficult for ourselves, all of our time off was spent writing and recording. There would literally be a week here and a week there. Sometimes we would do a show here in the States, and then and we would fly back, and then we would be booked for four days in the studio in the UK the next day after we land. I was falling asleep while Adam was playing a riff; I could barely fucking keep my eyes open.