It’s Just a Box of Wood: A Conversation with Leo Kottke (Part One)

An edited version of this transcript appeared in Rock and Roll Globe. 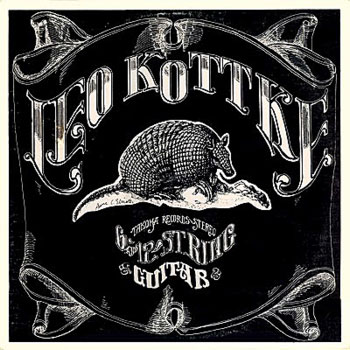 Leo Kottke is a giant in the guitar world. While his work rarely veers into the rock idiom, even rock guitarists appreciate the creativity and fingerpicking dexterity Kottke applies to the acoustic six-string and 12-string guitar. His first album, 1969’s 6- and 12-string Guitar established him as a force to be reckoned with. Much of his work since then has been as a solo artist, though he sometimes works within the band context. He has collaborated with Phish’s Mike Gordon on at least two album-making occasions, and promises more on that front (see story).

Though he still tours widely, Kottke admits that he has slowed down in other areas, namely making albums and doing phone interviews like this one. “I’ll go on for a year and a half about something nobody gives a shit about,” he warned me when we began. And he followed that caution with some advice: “Just interrupt, stop me, scream – anything you want – and it will probably bring a halt to whatever soliloquy I’m indulging in.”

He needn’t have worried. We got a little technical, a little “inside baseball” here and there, but for the most part Kottke and I just flowed the conversation where it led us.

This morning, I was spinning my vinyl copy of 6 and 12 String Guitars, which got me thinking. There’s this sort of idea which is counter-intuitive: many artists don’t even own their back catalog. Sometimes it’s owned by a whole bunch of different entities, and ownership changes hands all the time. Is that the case with your first record?

Yeah, very true. I had a chance to buy back the master for this record, but I have no idea even what the master is after this much time. I should have done it anyhow, but I did not. I think people these days – if they even have a record contract – are demanding that the masters be returned to them after something like a couple years or something.

What first attracted you to the 12-string guitar?

It was probably Pete Seeger’s playing, and especially a tune called “Living in the Country,” which I heard on an LP. The Bitter and the Sweet, I think was the name of it. It was a live recording, and more than the 12-string itself was the melody … but definitely the 12 was there. There was [also] Leadbelly, who had an entirely different approach.

You’ve mentioned that amplifying a 12-string is a challenge. Is that because of the wide range of the instrument, or something else?

No, it’s purely mechanical. It depends what type of approach you’re taking. If you just mic the guitar, that will work fine. But you can’t get away with that in concert … some people do, but the only guitar that really works well on a microphone is the classical guitar. Those were made to project; flat tops were not made to project. Who knows what anyone had in mind, but they don’t project. The sound just sort of oozes off the top, and it’s fine, again, playing in a little string band or small room, but it gets to be a problem after that. Also, the octaves on a 12 string are going to be a lot more ferromagnetic than the fundamental [strings], so magnetically, they’re really impossible. With transducers, you run into these kind of “humps.” Nobody has figured this stuff out. I think it will never be figured out. The flat top just isn’t amenable to broadcast.

So, I’m very close, myself, to going back to where I started, which is just playing on a mic. I’ve done it when I played gigs where the airline destroys the guitar or sends them to Hong Kong or someplace. You borrow a guitar, and you play on a microphone, and the crowds are fine with it. [Because] they know why you’re on the mic.

Still, somebody with more balls than I’ve got could train the audience to hear the microphone again. It works fine; it just isn’t hitting you over the head. 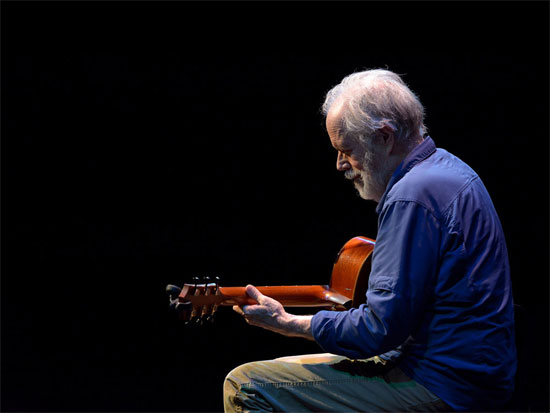 I read your trombone essay on leokottke.com I thought it was really amusing, but it doesn’t address the ways – if any – in which your studies on trombone and violin might have informed your approach to – or your understanding of – the guitar.

That’s a great question. You’re the only person to ever ask about that, and I appreciate it. Because although it took me awhile to notice, it had a profound effect. I got real immersion in a lot of theory and harmony within music, but it was almost unconscious, so that when I started on the guitar, that kind of [mitigated] any dead ends that tend to develop for self-taught people. Nowadays, I have tried to go back and pick up where I left off – which admittedly, was very early on – with harmony and theory, but I’m a slob. I’m very lazy and I kind of just avoid the homework. So, yeah, it meant a lot to me.

But it actually didn’t work out too well as a recording. I always wanted to hear a trombone quartet or something just playing behind the guitar, and I brought in a guy named Steve Paulsen, who was ridiculed as the last rich trombone player. He played in the Tonight Show band, and I handed him my trombone from the seventh, eighth, ninth grade and asked him, “Would you mind? I’d just love to hear this.” He ended up recording with it and his horn, something like a six-voice layer of choral shit behind this piece, which is quite a feat in and of itself. And I got to hear the difference between old brass and new brass; it’s just like a vintage guitar. The old brass really does age well. He switched out my slide for his slide because he said that on my horn – which had a good brand name; it was a Bach #10 – “They changed the diameter of one of the tubes on the slide because they thought it would make the slide work faster, ignoring the fact that if you restrict part of the tube on the way out the bell, you’re going to mess up the sound.” And it explained all kinds of things. It gave me a perfect excuse for my miserable embouchure, and it was just fascinating to hear about it, and to see him interchange his slide from a King, I think it was, with that horn. That looked like magic to me. So I got to hear what could have been, really.

I know that you busked for a time, early on in your career. Did that have an influence at all on your performance style?

Probably. People either take pity on your, or in my case, they see this child doing this, and give you a couple bucks. I don’t even know anymore how much the money was.

Later on, after I’d recorded, I was running around Colorado with my brother in law. He didn’t ask me about this, [but] he told the motel that I’d play in their sort of breakfast pit that night. And then he told me. I wanted to throw him down the stairs and jump up and down on what was left! So, I did that, and then he passed the hat. It’s great training for performing … not in how to ham it up, but in the license you can give yourself for even presuming to face a bunch of people and play at them.