“Descent” is Metal and Darkwave Coexisting 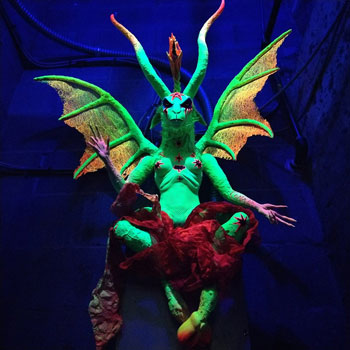 In creative and entertainment media, the “alternative” label is tossed around so freely that it risks losing its meaning. Hidden away in the basement of a building on West Asheville’s main thoroughfare, a bar called The Black Cloud aims to restore that meaning. With a heavy metal/goth vibe that sets it apart from most bars in town, The Black Cloud is now hosting Descent, a monthly DJ showcase featuring darkwave and “witch house” music. The second installment of Descent – this time hosted by local DJs Fafnir and Esuna – happened last November.

Laura Beach is a bartender at The Black Cloud; known by the nickname “Queen of Cups,” she’s very much into heavy metal. “Despite me being the metalhead that I am,” she says, “I’ll always have a soft spot for electronic music.” She says that many patrons of the beer bar requested a electronic music-themed night. Because of The Black Cloud’s size, live music isn’t often practical, but – especially when focusing on electronica – DJ sets make sense. With a name that refers both to the bar’s underground location and the dark tone of the music, Descent launched in October.

Such sounds might seem a departure from the metal that characterizes The Black Cloud’s usual fare. But bar owner Brett Morgan sees Descent as a good fit. He says that the cold, industrial aesthetic of the bar – “pretty much no warmth at all” – lends itself to metal, “a logical accompaniment to the overall vibe and feel of the bar. But darkwave fits in, as do goth and other forms of ‘dark’ music.” Morgan expresses an affinity for music that is “empowering, dark and emotionally moving. And if the bar can be a home for events that speak to those who identify with a subculture, and who might find comfort being themselves in this environment, then I’m all for it.”

The first Descent drew a crowd – regulars and newcomers alike – packing The Black Cloud. “My regulars are into heavy metal, but there’s some overlap between the metal and electronic communities,” Beach says. And because that event took place the same weekend as the Medieval-themed Festival of Heroes, it drew more interested patrons. “There’s crossover between the pagan and electronic music communities, too,” she observes.

Beach says that the DJs selected for spots at Descent spin a mix of their own tracks and those of other artists. “There’s a certain art to reading a room,” she says, and she seeks out DJs adept at doing so. But the process of finding those artists isn’t really that complicated. “Most of the time, it’s just who I know,” she admits. But because Beach has plans to continues the Descent series indefinitely, she encourages like-minded DJs and/or self-contained electronic artists to get in touch. “I hope to do this the second Saturday of every month, so I would love to hear from more people,” she says.

The November Descent featured sets by local DJs Paul “Fafnir” Lehto and Heinrich “Esuna” Arnold. Fafnir describes the ambience he seeks to create with his set: “I aim to achieve a dark, cerebral experience by drawing from neurofunk.” He quotes British music critic and author Simon Reynolds’ description of the drum-n-bass subgenre as “the fun-free culmination of jungle’s strategy of cultural resistance: the eroticization of anxiety.” He cites artists Enei, Silent Witness and Jam Thieves as representative of the kind of music he spins.

Esuna stakes out a subtly different yet complementary musical aesthetic for his set. “I’m interested in playing with some of the textures and qualities I typically enjoy in metal within the context of dance music,” he says. Citing the work of G Jones, Bassnectar and Reso, he says, “I’m hoping to create a vibe that takes the listener on a journey to and from different emotional places.”

Consistent with The Black Cloud’s be-yourself attitude, attendees at Descent events react to the DJ sets in the way that best suits them. Asked if people dance or stand with their arms folded, Beach laughs. “Column A and column B,” she says. “A little bit of both.”

Morgan wryly divides The Black Cloud’s potential patrons into two categories: “Those who know where the bar is located, and those who can’t find it.” He acknowledges that lack of a proper storefront makes the establishment difficult to find. “But those who find us generally come back,” he says. And those who enjoy a bit of the darkwave alternative with their metal now have a home, once a month.