At its core, rock ‘n’ roll has always been about youthful rebellion. From the national debut of Elvis Presley — who was initially shown on television waist-up so as not to offend delicate sensibilities with his shaking hips — to transgressive modern-day artists like Marilyn Manson and GWAR, part of rock music’s mission has to been to entertain some while shocking others. And since the very early 1970s, Alice Cooper has reigned supreme as the king of shock rock. 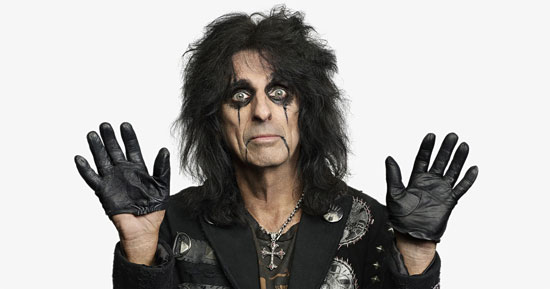 Once upon a time, Alice Cooper was band, not a person. Signed to a label co-founded by iconoclastic musician Frank Zappa, Alice Cooper made a pair of well-regarded but little-noticed garage rock LPs. Jumping to Warner Brothers Records and teaming up with producer Bob Ezrin, Alice Cooper embarked on a path filled with hit singles including “I’m Eighteen,” “Under My Wheels,” “Be My Lover,” “Elected, “No More Nice Guy” and the teenage anthem “School’s Out.”

By 1975, the group was no more, but lead singer Vincent Furnier had taken Alice Cooper as his stage name. As a solo artist, he would go on to score more hit albums and singles; six of his songs reached the Top 40.

Nobody’s idea of a virtuoso vocalist, Cooper made the most of what he had, focusing instead on putting on a thrilling and memorable show. “I was at the forefront of a movement bringing theatrics to rock,” Cooper says. With a keen sense of what his public wanted, Cooper served up memorable fist-pumping rockers that became part of a generation’s life soundtrack. And from the early 1970s onward, he cultivated his reputation as a master of the macabre, a supreme showman and one of the prime movers of theatrical shock rock.

With a stage show that often included mock executions (Cooper’s stage props feature a guillotine), Alice Cooper pushed the limits of what was acceptable onstage, but he always did in the name of entertainment. Today at age 70, Cooper hasn’t lost his edge, nor his motivation to create. His most recent studio album, 2017’s Paranormal, reunited him with Ezrin, charting in 14 countries. “He’s my guru when it comes to writing,” says Cooper. And in a surprising move, that well-received disc saw the first-ever reunion of the surviving members of Alice-Cooper-the-group on three tracks. “And it sounds like the original band,” Cooper says. Nearly 50 years and as many albums after his major-label debut, Alice Cooper still skillfully combines metal, melody and mayhem.

Click HERE to read my Q&A with Alice Cooper.