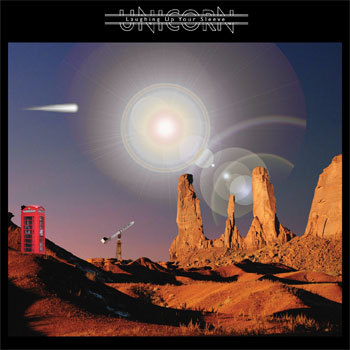 Few people remember a British band from the 1970s called Unicorn. Though they never found widespread success, the band recorded four major-label albums. Two and half of those were produced by David Gilmour of Pink Floyd. His band’s manager Steve O’Rourke signed Unicorn to a management contract, and got them a record deal as well.

But before all that, the group went to Gilmour’s home studio and cut an album’s worth of demo recordings, with the Pink Floyd guitarist producing. More than four decades after those demo sessions, the tapes have now received commercial release as Laughing Up Your Sleeve, out October 5 from Omnivore Recordings. I recently spoke with project curator, friend of the band and Executive Producer David DiSanzo about Unicorn. (You may also enjoy my two-part feature/interview with Unicorn bassist Pat Martin.)

As you explain in the liner notes for Laughing Up Your Sleeve, you discovered Unicorn in the early ‘80s. How did you learn about them?

Back then, there really weren’t many books on bands, besides maybe the Beatles. But Miles did a book, Pink Floyd: A Visual Documentary. That book had sort of an incomplete discography in the back, and it showed the Unicorn sleeves. So I set out on a hunt to pick up these records, and—little bu little—I found them in flea markets, little by little. I read the sleeve notes and I looked at the names of the people involved, and aside from David Gilmour and Steve O’Rourke managing, there was really nothing that looked familiar to me.

I tried to pay attention to see what else these guys may have been doing, because at that point in time, it had only been a few years since their last record, and they just didn’t seem to show up anywhere. There was nothing; they just seemed to disappear. Nobody knew about them, which I thought was odd because of the Pink Floyd connection. And when I mentioned that David Gilmour recorded “There’s No Way Out of Here,” people would say, “Oh, I thought he wrote that.” No, it was a cover of song by the band Unicorn.

How did you get involved in the reissues of their albums?

Well, I loved these records, and I made cassette copies, played them for people, and continued to play them throughout the years. When I got my driver’s license, I used to play them in the car. And when I started working, I’d bring them to work. Eventually I ended up working at EMI and Sony Music, and a lot of people who I worked with loved the music. And when I started to work for EMI, one of the first things I did was look into licensing their albums, because I wanted to reissue them myself.

EMI had records stating that the Unicorn master recordings were owned by them, and they wanted to charge me $10,000—a lot of money—for an advance. But they didn’t own the masters.

When CD reissues started to really happen, there was a box set that came out called The Famous Charisma Records Box Set. It was never released in America. Unicorn’s Blue Pine Trees did come out on Charisma in England. So, there was a track from it on the box set, and as far as I recall, that was the first time I ever saw a Unicorn track on a CD.

But much later we found out that the three albums that David Gilmour did with Unicorn were owned by Steve O’Rourke’s management company, EMKA. And then, when I finally got in touch with See for Miles in 1999 or 2000, they issued a Best of Unicorn CD. I was ecstatic that finally somebody was giving Unicorn some attention. I just sent an email just saying, “Congratulations on this release. I’m really excited for it. I love the band. Blah, blah, blah.” They forwarded that email on to Pat Martin, and Pat got in touch with me.

I discovered that Pat had been trying himself—in desperation, and unbeknownst to me—to get in touch with EMI to get a hold of the masters recordings. He just wanted to make some digitized copies for himself, the other members of the band, and friends. But they just kept blowing him off, never calling him back. And then he asked David Gilmour for help in that regard, and Gilmour stepped in and went to EMI and said, “By the way, actually, you guys don’t own this stuff. So can we get the tapes back?”

So, they gave the recordings back to David Gilmour and Steve O’Rourke, and Gilmour said to O’Rourke, “I suggest you just give these to Pat and the band and let them have them.” So they just gave the rights back to the band. David Gilmour was a genuine fan of the band; he really liked and believed in them. He’s still in touch with Pat Martin. Gilmour has gone above and beyond for the band in the past.

You were one of the small handful of people—family and friends—who witnessed Unicorn’s 2001 reunion. Did they sound anything like the band that you heard on those 70s albums?

They did; it was chilling. Kevin wasn’t there, and it was just an acoustic set played in the living room, with Pete playing drums on his legs, basically, tapping things and everything. But the harmonies were there, and Pat’s bass playing was there, and it definitely sounded authentic. We’ve got a recording of it somewhere.

One occasionally hears stories of old master tapes being rediscovered. It’s even more rare still, though, to get hold of the original multitracks. And it’s fair to say that the current thinking about how to mix an album is very, very different than it was decades ago; generally there’s a lot more bottom end, and a lot of people do “brickwalling” compression. Was that sort of thing taken into consideration when mixing these tapes, with an eye towards making them sound period-correct? Or was the thinking to try to mix them for 2018 listeners?

If anything, we wanted it to sound like the albums—the ones that came out in the 70s, that Gilmour produced—because we loved the way those records sounded. We loved the sound that David Gilmour got in the studio with them, particularly on Too Many Crooks. We wanted the dynamic range, we wanted the clean sound, and we wanted to hear every detail and every instrument.

[Mixer] Scott Anthony felt the same way. I didn’t really speak to Scott too much about it; I had heard things that he had done previously, and I liked what he had done. I liked his taste. So we sort of just let him have a go at it, and he delivered exactly what we were expecting.

(Once again, you may also enjoy my two-part feature/interview with Unicorn bassist Pat Martin.)