Johnny Tucker: Everything Comes from My Soul, Part Three

Tucker made his first solo album, Why You Lookin’ at Me in 2006. It’s cut from a wholly different cloth than Tucker & Thomas and his latest release. Fans of modern-day blues-rock hybrids – complete with pig-squeal lead guitar and horn charts that aim for a Memphis vibe – may enjoy the disc. The songs focus less on Tucker’s individuality and more on his gift for mimicry: “Do the Rufus” does indeed conjure fond memories of the World’s Oldest Teenager, and “Big Butt Women” – a thin rewrite of any number of blues/r&b standards – is amusing enough, but the album suffers from a somewhat faceless, bar-band quality. A decade-plus later, Tucker would make an album truer to his native musical instincts.

“What comes out of my mouth is what I felt when I was feeling the music,” he explains. “The rhythm and everything comes from my soul, because that’s the way I felt. You know, you have to say what you feel in order for it to really work.” Tucker says the most important lesson the blues has taught him is this: “Take your time and think about what you feel. If you think about what you feel, you will always know what you’re going to sing.” 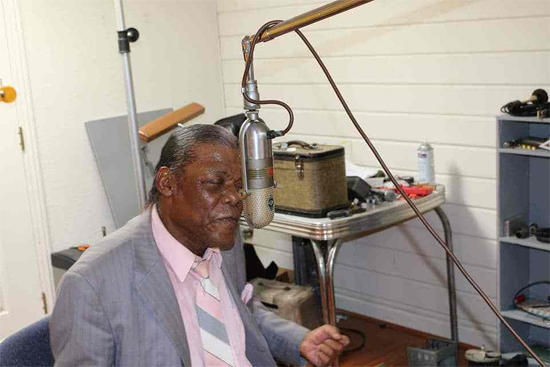 It’s fair, though, to wonder how Tucker’s stream-of-consciousness composition style lends itself to live performance. Wouldn’t it be all but impossible to re-create a made-up-on-the-spot song live onstage? Tucker good-naturedly dismisses that notion. Once you do a song, he says, “it’s yours. You will never forget it once you do it, because if you ever hear it again you think, ‘Oh, that’s my song now.’ And ain’t nobody going to do it like you. Because you’re making it up.”

Tucker gets a good bit of his inspiration from the love of his life. “I look over there at my wife, because I have her in the studio,” he says. “I look over there and think about something that I’m going to say to her, and that’s how I came out on the tape. Man, that’s the only way I know how to do it. Because I sing what’s in my heart. I sing what I feel inside, you know?”

He says that it all comes down to feeling. “It’s about the way you move when you hear music,” Tucker says. “Some people tap their feet, some people nod their head, some people will walk and bounce and jump around. Everybody is not the same. We don’t play music in the same way everybody do.” He verges on waxing philosophical: “When you hear something that you’ve never heard before, that means you’re feeling something that you never felt before.”

That feeling is showcased on Seven Day Blues, because the players backing Johnny Tucker got the feeling too. “They didn’t know my songs,” he emphasizes. “They didn’t know nothing that I do. I just said, ‘Y’all just play,’ and they played. I don’t get no ‘Where you want to do that?’ No, no, no. They just played the blues. I found some cats that know how to play the blues and play it well, no problem.” The sessions for Seven Day Blues were the quickest Tucker has ever experienced. “Two days,” he says. “It took me two days to put all of them records down.”

In fact, Tucker says that he and his sidemen cut more than the fifteen tracks included on his album. “I did four songs on Kid Ramos’ CD, too,” he says. The California guitarist’s new album Old School features Tucker singing three originals co-written with Ramos plus a reading of the traditional gospel tune “Jesus Come By Here.” And Tucker says he did additional tracks that may show up on an album by one of the other players on Seven Day Blues.

It’s not completely off base to consider Seven Day Blues a kind of comeback album for Johnny Tucker. Because he thought he was done making music. “I had gave it up,” he admits. “I had gave up the whole thing. I wasn’t thinking about this no more; it was gone. But now the Lord put it back in there; he said he got a little more work for me to do. So I’m going to do some more work for him. Making people happy: that’s what I want to do.”

Is Tucker going to make another album? He has a ready answer. “I know I am. I’m trying to do one in a minute,” he says. “I’ve got some more for you coming pretty soon. I wish I could go back to the studio [now], and I might just do that, just put them on the shelf, let them sit for a minute.”

Meanwhile, bursting with boundless enthusiasm even now at age 72, Johnny Tucker is excited about bringing the new music on Seven Day Blues to live audiences. But not just yet. “I just had surgery on my neck,” he explains. “And so I’m in a little ‘cuperating thing. I’m getting better and better all the time, thanks to the good Lord and everybody praying for me. So I feel like I’m going to be out of here in a minute.”

It seems likely that Tucker’s determination will make that happen sooner rather than later. “I want to take this [music] out so bad, Lord have mercy,” he says. “Like I was telling my manager, ‘I don’t care if I have to come in a wheelchair. I want to be there!’ Somehow, I got to be there. It is in my body and my soul. The good Lord put it back in my heart, and I got to take it from there, man, and try to do something with it,” he insists. “I just can’t leave it alone.”