Guitarist Michael Schenker rose to fame in the 1970s as the lead guitarist in his older brother’s band, Scorpions. German-born Schenker soon set off on a path of his own, making a string of popular hard rock albums with UFO, and later with his own Michael Schenker Group. His bands would be characterized as much by personnel turnover as by Schenker’s brand of sizzling fretwork. 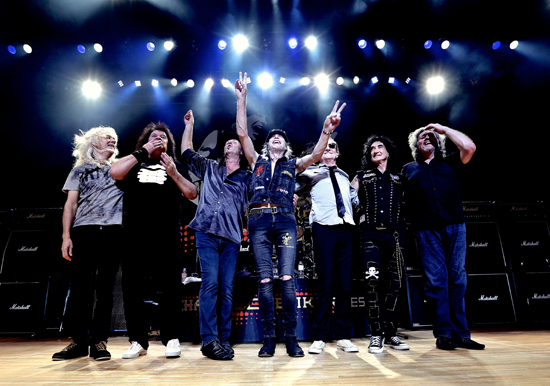 But for his current tour, Michael Schenker is demonstrating that there’s no bad blood among his former vocalists: three of his former lead singers – Gary Barden, Graham Bonnet and Robin McAuley – join current vocalist Doogie White in an all-star aggregation called Michael Schenker Fest. “There were no fences to mend,” he says. Schenker has decided now is the time to “perform my music with the people I wrote it with,” for both old and new fans.

Schenker says that the unlikely mega-reunion happened more or less on its own. “It was not a master plan,” he says. “It just took things bit by bit, step by step. From one day to another, I just went forward with the next possibility.” The first step was a series of dates in Europe. A DVD was put together chronicling those shows, and it was very well-received. “For the first time,” Schenker says, “people were able to see what the full potential of this undertaking was.”

The next logical step was the making of an album. March 2 saw the release of the aptly-named Resurrection, the debut studio release from the four-vocalist Michael Schenker Fest. The guitarist originally had something else in mind, but after recording song with titles like “Take Me to the Church” and “The Last Supper,” he said to himself, “Wait a minute; I have to think of a new album title!”

Schenker spent some years spent in the relative commercial wilderness, a time when other groups were capitalizing on the hard-rock path blazed by him and his contemporaries. But he looks back on that period as an important part of his ultimate musical path. “The middle years were basically the battleground,” he says. “In order to develop, you have to have obstacles, hurdles, challenges. And those years, they got all the stuff that was in the way out of my system. You can’t pay money for that kind of learning. And you get stronger if it doesn’t kill you. I have two tattoos on the back of my shoulders. One says ‘Born to be free,’ and one says “Born to overcome.’ And that’s my life.”

In 2011, Schenker won the Marshall “11” Award, given to recognize “those artists and musicians who represent rock and roll excess and living on the edge.” Though Schenker’s career and life can be said to have existed on the edge in more than one way, today he prefers to focus on the music side of the equation. “I’m like [Christopher] Columbus,” he says with a hearty laugh. “I love to play and discover. I just love to move forward and do it.”