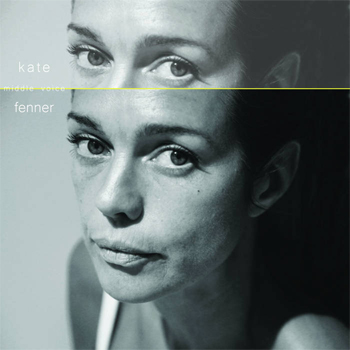 As “Two Minds” opens Middle Voice, one might think that Kate Fenner is merely another in a waif-viced singer-songwriters. But give the song a moment to unfold, and both it and its singer/composer reveal greater depth. There’s a windswept Americana feel to the music, with a mood and sensibility that evokes pleasant memories of Bob Dylan’s Blood on the Tracks. But Fenner’s strong, crystalline voice soars above the instruments in a way unimaginable on a Dylan record.

Middle Voice‘s production aesthetic places Fenner’s voice well out front, where it belongs. Subtle instrumental touches (including electric guitars, bass, drums, piano and uncredited brass) add texture without distracting from the vocals or lyrics. Fenner overdubs her own voice to cover harmony and backing parts, and that aesthetic choice makes sense when one learns the album’s back story: Fenner had been diagnosed with thyroid cancer, and faced the possibility that she might lose her singing voice. The lead vocals were cut ahead of the (happily successful) surgery to remove the cancer, while the backing parts were recorded after she recovered.

Despite the harrowing series of events woven into Middle Voice’s development, the record is largely upbeat, but not in a shallow, smiley-face way. I’ve read that Fenner has been compared to Joni Mitchell; while it’s true that she possesses (and effectively uses) a powerful range, Fenner has a pop melodic sensibility that makes her music lean in a more accessible direction than has been Mitchell’s wont.

Not to take a single thing away from Kate Fenner’s lyrics, but her voice is so strong and pure that – for me at least – it doesn’t even matter what she’s singing about. Her wonderful vocal on “The Yield” suggests Maggie or Terre Roche.

And the second half of Middle Voice reveals a wonderful surprise, one that fits perfectly but is wholly unexpected: a cover of the Blood on the Tracks cut “You’re a Big Girl Now.” It’s worth noting that I had no idea the Dylan cover was on the album when I first spotted its aesthetic similarities to Blood on the Tracks. In the same way that Dylan’s 1975 LP was an exercise in catharsis, so it seems is Kate Fenner’s Middle Voice. That the artist chooses to share that experience with listeners is truly a gift.