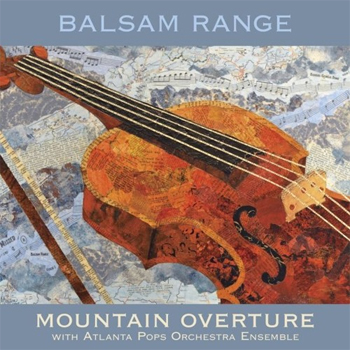 Much of what is thought of as classical music has its roots in the folk melodies of European countries. With that in mind, the pairing of bluegrass heroes Balsam Range and the Atlanta Pops Orchestra Ensemble isn’t such a radical concept. Steep Canyon Rangers have similarly augmented their music live onstage with classical instrumentation. Mountain Overture selects best-loved tunes from Balsam Range’s body of work and recasts them in a bluegrass/classical hybrid.

A greatest-hits collection of sorts, Mountain Overture builds upon the foundation of songs from the Canton quintet, adding instrumentation from seven classical players and (on some tracks) a percussionist. The album opens with “Trains I Missed,” originally the title track from the band’s third album. The differences between that 2010 recording and the new version are subtle: the strings don’t do much beyond filling in behind the bluegrass players. But the new reading adds wonderful layers of vocal harmonies, and drummer Kevin Leahy adds a welcome solid bottom-end to the tune, one that contrast nicely with the soaring vocals.

“Blue Mountain” finds the group reaching back to Marching Home, its 2007 debut release. Here the classical instruments take a more prominent role, suffusing the song with a richness only hinted at in the original recording. The new arrangement for “Eldorado Blue” also makes effective use of the added string players.

“From a Georgia Battlefield” (originally recorded for Balsam Range’s 2014 album Five) further explores the possibilities presented by the Ensemble. In places, “Battlefield” takes the approach of using the string section as the basis of the arrangement, with members of Balsam Range adding their instruments atop that backing. It’s an effective choice, and shows that the overall mission of Mountain Overture isn’t to apply a one-size-fits-all arrangement style to all of its 10 tunes.

A highlight of Papertown, the band’s 2012 ode to its hometown, is “Any Old Road (Will Take You There).” The 2018 version of the tune showcases guitarist Caleb Smith’s gospel roots in a melodic uptempo setting reminiscent of some of Glen Campbell’s 1970s work. Darren Nicholson’s mandolin is at the center of “Jack Diamond,” while the string players provide understated support.

Balsam Range first covered John Denver’s “Matthew” on Five; the new version isn’t a remarkable departure from that version. The string players use Buddy Melton’s fiddle part as a basis for their accompaniment. On “Last Train to Kitty Hawk,” it’s the Pops Ensemble’s brass players’ turn to shine; their vaguely south-of-the-border fills don’t really line up with lyrics about coastal North Carolina, but they provide a nice textural effect nonetheless.

The yearning, lilting melody of “I Hear the Mountains” was first heard on Balsam Range’s 2016 album Mountain Voodoo. As on “Matthew,” the string players base their contributions on Melton’s lovely fiddle work. The disc concludes with a new reading of “Burning Georgia Down,” a tune from Balsam Range’s debut release. The string players are at their liveliest here, both providing instrumental support for the core quintet and adding tone color between vocal phrases.

As impressive as are both Balsam Range and the Atlanta Pops Orchestra Ensemble, the unsung hero of Mountian Overture is Wes Funderberk; on all but one tune, it is his arrangement skill that creates the seamless musical blend between the bluegrass and orchestral players. More than simply a greatest hits collection, Balsam Range’s new album showcases an effective blending of orchestral and folk music.