Bill Kopp: But Jack Daugherty’s production style for the Carpenters was nothing like the sound of Cape Dory…

Alainna Moore: Our earliest records were soaked in reverb, but it’s nice for me to explore other production techniques, to see how they make me sing differently. I love the production style of really dry, tightly doubled vocals like Harry Nilsson and Karen Carpenter. I like how it makes the song instantly more confronting and personal, right there in your face.

So that’s been something we’ve been experimenting with lately. This is still really new to me; having a song with no reverb on my voice was totally life-changing. But I’m sure we won’t live there forever; we always change and find something else. These are all the things that we’re thinking about; we’re trying not to get too comfortable with one way of doing things. We’re using different production techniques as ways to elicit new approaches to songwriting, because you hear a song differently when you change the way it’s recorded. 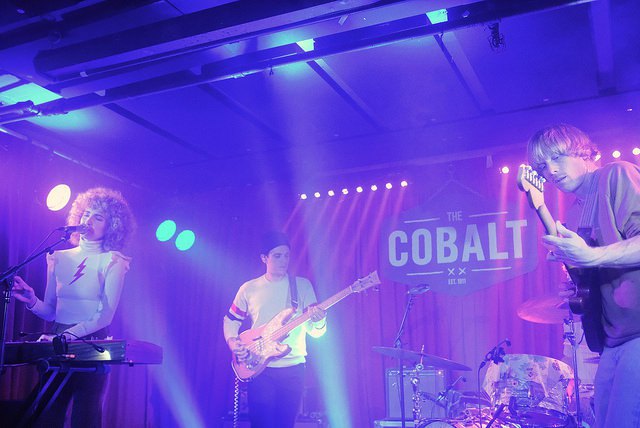 You mentioned you’re building a home studio. Are you using old or new technology?

We have lots of out-of-the-box stuff. We have a real tape delay, and we use that a lot. We have analog compressors and things, but then we actually record into our computer on ProTools. We do use a four-track; sometimes we just bounce a thing to tape after it’s been recorded. Or, we’ll record one thing to tape and then put that into a ProTools session and build from there.

We really like the sound of analog. Sometimes we’ll just put the drum take to tape, then we’ll put it into ProTools, and then we will build a loop so that we can have it set to a grid. Since I already write in such a classical [pop] style, we’ve worked really hard to use a lot of modern recording techniques. Because sample culture has influenced popular music so much.

Speaking of drums, one distinctive feature of most Tennis recordings is that the drums often end up sounding like a drum machine. So you actually do that on purpose?

Absolutely. We start [recording] every song with drums first, unless it’s a ballad. The drums are the most important part to us, and also the hardest to get right. Our goal is: if we enjoy the drum performance and tone in the session first – if we can like that unmixed with nothing else there – then we already know that we are on track for the song. 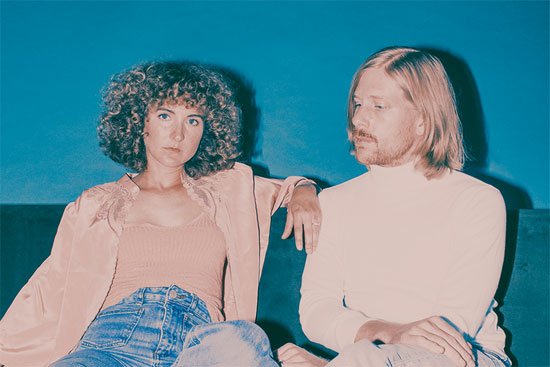 How has playing live these last several years affected your approach to making records?

It’s forced us to write more diversely. If we could, we would write almost exclusively mid-tempo, melodic, vibey songs. But then live, we would notice that with one song after another of that kind, we just started to lose the crowd.

So we’ve actually been forcing ourselves to speed up our songs. For this EP, when we wrote “No Exit,” we were just like, “This has to be 120 BPMs. We have to write a faster song.” And the same with “Diamond Rings.”

When we went to play “No Exit” live, it was still too slow, so we sped it up about 5 BPMs. On record, it’s 120, but live, we play it more like 125. And we were laughing, because considered speeding it up when we were recording it. We were like, “125? What is this madness? We couldn’t be faster!” And now [we realize] “Oh, we really could’ve sped that song up a little more.”

How would you describe the relationship between live performance and studio work?

It’s definitely a complex relationship. But [live performance] does have the positive effect of re-calibrating our headspace of what we want to write when we go home. Since our attraction to songwriting is so engineering- and production-based, sometimes we end up writing songs that are wholly dependent on the sounds and the mix. And I’ve since realized that while those are lovely to listen to, the reason why they might not hold up live is because the songwriting is lacking. So we’re really, really trying to push ourselves to write songs that work no matter how they’re played or heard.

That’s something that playing live has taught us: noticing when the crowd responds and when they don’t. Because you don’t get the opportunity to witness that when people are listening alone at home to your record. You don’t know which moments are connecting and which ones aren’t.

Playing live helps me understand what’s working and what doesn’t, and I’m often surprised. Like, a song that I will think would connect the most most just falls flat night after night. An example of that is the song “Island Music,” the last song on Yours Conditionally. We thought that that would be a really great live song – really intimate and emotional – and we tried it several nights on the last tour. And it felt like we lost the crowd every night. It was too heavy, a little too dark, a little too somber, and it didn’t work the way we thought it would. So we retired it from the set.

That’s interesting that you take into consideration feedback from the audience. Not all artists do that. Some take an attitude of, “This is what I want you to hear, and this is what I’m gonna play.”

I will never have that attitude towards shows, ever. I mean, [the audience] paid to be there.

But I’m definitely not a dancing monkey. Sometimes people are like, “Play my favorite of your song that nobody else wants to hear,” and I’m like, “Well, sorry. I’m not gonna do that.” I definitely don’t want to be at the mercy of their demands, but if I’ve lost the crowd on the same song a few nights in a row, it’s usually because the song doesn’t work.

Much was made of the fact that you and Patrick took a six-month sailing trip as a way to inspire material for Conditionally Yours. How did that manifest itself in practical terms?

Without it, I don’t even know if we would’ve made the record. We were very, very burned out. Writing felt like a huge chore that was very unfulfilling, and promoting the record felt soul-sucking, just schlepping around from city to city saying, “Please, like my music.” It felt so disgusting and not the point of it all. So we went sailing with the mindset that we would write [only] if we wanted to.

We were testing the waters to see if we would even miss music when it was out of our lives. We only brought the most minimal possible setup of any instruments at all, because our boat is really small, and salt water is not a friend to recording equipment. We didn’t write at all – or even consider writing – for a couple of months into the trip. But the last month, we found a really tranquil anchorage deep in the Sea of Cortez. And after so many months off, we did miss making music. We thought, “We’ll write songs for fun, and we don’t really care what comes of it.”

We ended up writing half the record in about a week; normally, it takes us months. Once we went home, we rented a house in the mountains, brought our own studio equipment up there with us, and hired a couple of friends to help us out. We recorded over the course of about two weeks, and that was that. It was the most joyful album-making experience I’ve ever had.