The Freeway Revival: Keys to the Highway

The Freeway Revival starts with a foundation of concise, structured songs; the Asheville group builds upon that with elements of Southern rock, deftly weaving in displays of vocal and instrumental prowess. In celebration of the release of its first full length album, Revolution Road, the Freeway Revival played Asheville, North Carolina’s Isis Music Hall November 18.

The band got its start when brothers Adam and Jonathan Clayton (on keyboards and guitar respectively) put the project together in 2015. After some personnel shifts, the band settled on its current lineup of the Clayton twins plus guitarist Tim Husk, drummer Cartwright Brandon and bassist Kenny Crowley. In 2016 the band recorded a self-titled EP. The five-song set was recorded live in a studio inside a friend’s barn in Durham. 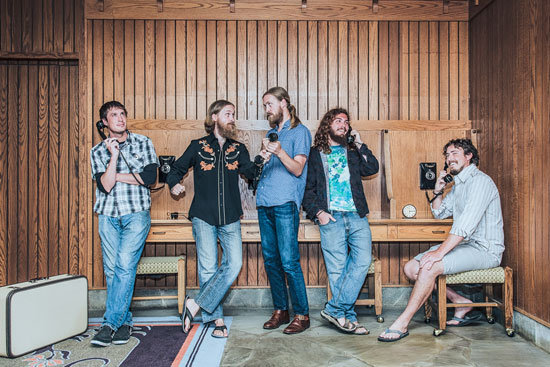 A year later—and with a fresh batch of songs—the band approached the Revolution Road sessions in a manner at once very similar and quite different. The band recorded all of its basic tracks Audiogrotto Studio in Newport, Ky. over the course of five days, again playing together live in the studio. “But then we came home and did a lot of the overdubs [ourselves], sending them over the internet,” Crowley says.

That approach had advantages and drawbacks. “People got to work out their melodic parts a lot tighter, and write some cool guitar solos and piano melodies,” Crowley says. But the back-and-forth nature of file sharing meant that the process took longer than the band might have liked. “The process definitely had some trials and tribulations, but it ended up great.”

To finish the album, the Freeway Revival decided it best to travel back to Kentucky, recording all of the vocal parts live. “There’s something that happens in the blend when you’re singing together,” Crowley says. The band makes the most of close vocal harmony whenever possible. “It comes effortlessly, and everyone can switch parts if they need to.” Four of the five band members sing, and all five are songwriters.

Crowley says that the band’s collective songwriting process focuses upon building songs around the layered vocal parts they’ve developed. “One of us brings a song to the table and we all finish it together,” Crowley says. “Or sometimes—like last night—we have a rehearsal and a new song just comes out. Then we take the the time to work it out. So in that sense the songs all are all really crafted together. We’re pretty dedicated to actual song crafting and song structure, and taking people on a journey.”

That vocal and compositional variety is key to the band’s strength on record and onstage. Crowley says that the band’s sonic character developed through combination of the varying yet complementary styles each songwriter brought to the band.

“The brothers are a little more country and kind of rock ‘n’ roll; I’m more folk-rooted, influenced by Bob Dylan, Paul Simon and the great songwriters of that era,” Crowley says. Husk grew up on a steady diet of jam bands and old-school rock, and Brandon plays in the style of Led Zeppelin’s John Bonham. “It’s not like we’re reinventing the wheel or anything,” Crowley admits. “But we very specifically have our own sound.”

While the band has built a local following, their focus is on the bigger picture. “I guess we would say we’re in the Asheville scene,” Crowley allows. “But Asheville is so eclectic, and there are so many venues. It can be challenging to get embedded in any particular scene here.” The Freeway Revival has played as far north as Burlington, Vermont and did what Crowley characterizes as “a couple unofficial gigs” last spring during the annual South by Southwest Festival in Austin, Tex. “We’re mainly focusing on the east coast now,” he says, hastening to add that the band will happily “branch west if there’s a good opportunity.”