Though he’s known primarily for his 1979 hit single “Cruel to Be Kind,” singer-songwriter Nick Lowe is a revered figure in rock and pop music. A key figure in the British punk and new wave scenes of the late 1970s and early ’80s, Lowe has since turned his own music in a more low-key direction. But for his current tour, he’s teaming up with inimitable American instrumental rock icons Los Straitjackets, performing his songs old and new in high-energy style.

Lowe released his first solo album, Jesus of Cool, in 1978 (in deference to delicate American sensibilities, his U.S. label re-titled the LP Pure Pop for Now People). Nashville’s Los Straitjackets debuted with 1995’s The Utterly Fantastic and Totally Unbelievable Sound of Los Straitjackets. Though their music was somewhat dissimilar, both acts have long shared an irreverent and warmly humorous approach to music. 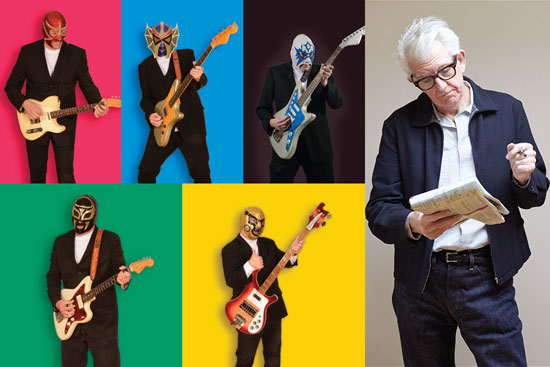 But their paths didn’t cross until they shared a North Carolina stage in 2012. “We’re both on Yep Roc [Records],” notes Los Straitjackets guitarist and co-founder Eddie Angel. The Hillsborough-based independent label celebrated its 15th anniversary with a three-day music festival. “We backed Nick for a few songs,” Angel says, “And everybody thought it was a good idea.” Los Straitjackets would go on to support Lowe on three Christmas-themed tours.

Earlier this year, Lowe and Los Straitjackets played a show at New York City’s Lincoln Center. “That was the first time we did a show [together] that didn’t have any kind of Christmas theme,” Angel says. “This is the first tour that’s just his regular catalog.”

Los Straitjackets’ latest album is a collection of instrumental readings of Lowe songs, What’s So Funny About Peace, Love and Los Straitjackets. The title is a nod to another Lowe classic, one that brought its songwriter a fortune when Curtis Stigers covered it on the soundtrack of the 1992 film The Bodyguard. But while Lowe is noted for his lyrics, Los Straitjackets’ tribute to him focuses instead on the strength of his melodies.

On the new record, the band recasts Lowe classics in different styles: “Lately I’ve Just Let Things Slide” becomes a surf rocker, and the uptempo “Cruel to be Kind” becomes a ballad. While founding member Danny “Daddy-O Grande” Amis no longer tours with the band (after successfully battling cancer, the guitarist moved to Mexico City), he remains a formidable presence on Los Straitjackets’ albums. “Danny turned a Nick Lowe song into something that sounded like the Shadows,” Angel says. “I think Nick got a big kick out of that.”

Not even counting his records with the bands Kippington Lodge and Brinsley Schwarz (not to mention his short-lived supergroups Rockpile and Little Village), Lowe has released 14 studio albums. For the What’s So Funny album, the members of Los Straitjackets picked some hits and some deep-cut personal favorites.

Los Straitjackets have a well-earned reputation for reinventing the works of others; their reading of the Celine Dion Titanic hit “My Heart Will Go On” is just one of many inspired examples. “But we don’t have any problem writing originals,” Angel notes; his band has released 20 albums to date.

For this tour, Los Straitjackets revert to playing Nick Lowe’s songs the way they were originally recorded. And the band is happy to bend its style in the direction of another artist when doing so makes musical sense. “It’s a real kick for us to work with people we’re big fans of,” Angel says. Playing with Lowe affords the band opportunities it wouldn’t otherwise experience. “For instance, our drummer [Chris Sprague] is a really good harmony and background singer,” Angel points out. “But you would never know that from our shows.”

Angel says that after the tour with Lowe – a dozen dates in the Eastern half of the U.S. – the instrumental band will head back into the studio with Danny Amis. “We think it’s time for a new album of originals,” Angel says, “a return-to-the-roots kind of an album where it’s just two guitars, bass, and drums: a real rock ‘n’ roll record.”

But for now, Los Straitjackets are enjoying their time on the road with the Jesus of Cool. “He’s such a pro,” Angel says. “You learn a lot just by being around Nick. Here’s a guy who’s been able to have a career spanning more than four decades, and he’s probably better now than he’s ever been.”