The Melvins’ Buzz Osborne on Love, Death and Making It

The Melvins don’t like to do the same thing over and over again. Founded in 1983 in tiny Montesano Washington – two hours’ drive southwest from Seattle – the band led by Buzz Osborne (aka King Buzzo) has always done things its own, idiosyncratic way. “Anytime I could do something that’s a little different, I’m down,” says Buzz Osborne. “That’s it: Just adding a flavor you might not have thought of.”

After 2016’s themed release Basses Loaded (the album featured a large cast of guest musicians handling bass guitar duties), the band has now released a double album. But taken as a whole, A Walk With Love and Death is no ordinary album. Osborne would have you believe that the band’s latest album is both totally unique and yet very much a piece of the Melvins’ body of work as a whole. “It’s not a whole lot different than things that we have done in the past,” he says. “But it’s not like anything anybody has ever done.”

The first disc (Death) is, by the Melvins standards, a fairly conventional album; it features nine songs that explore musical territory familiar to fans of the band’s deep catalog: heavy, mid-tempo tunes with memorable guitar riffs and a thunderous bottom-end. While some tunes showcase yelping lead vocals, others – like “Edgar the Elephant” display vocal harmonies that recall late-period Beatles.

After a long succession of bassists – eight at last count, many of whom returned to guest on Basses Loaded – in 2016 Redd Kross bassist Steven McDonald took responsibility for supplying the Melvins’ low frequencies in his own style. “I want the way he plays; that’s what I’m interested in,” Osborne says. “Not Steven McDonald playing what I tell him to play.”

A Walk With Love and Death‘s second disc has a completely different feel. Subtitled Love, it’s the soundtrack to a film of the same name. Some of the tracks on the second disc are recordings of impromptu, one-off jams. Commenting on the seemingly offhand nature of those tracks, Osborne says, “That’s what it sounded like that day, and we accomplished what we were trying to accomplish.” Reaching for the nearest metaphor, he adds, “we tried to throw out the baby and keep the bathwater.”

In between the short songs on Love are odd bits of “found sounds,” weird spoken-word bits and psychedelic audio experiments. As good as the Melvins’ regular albums are, it’s this disc that’s really intriguing.

“We recorded a lot of the stuff with really ambient techniques,” says Osborne. “On a couple of tracks, we would record to a microphone outside, and then record [other sounds] over that.” He points out that Death has some of this ambient material as well. “But you have to listen for it,” he says.

Love is made up of shorter tunes in a wider variety of styles, interspersed with bizarre field recordings and sonic experimentation, the likes of which one might find on any of Frank Zappa’s early albums.

And like Zappa often did, Osborne thinks in terms of a unified work. “I don’t really want to view the album and the film as separate things,” he says. “I view it as one gigantic project all called A Walk With Love And Death.” There’s a distinctly cinematic quality to the sequence of songs, especially on the album’s second disc.

The crowd sounds, blips and bleeps scattered across Love may also remind some listeners of Pink Floyd’s landmark 1972 album The Dark Side of the Moon. Osborne concedes there’s some similarity. “I would find it difficult to find any bands that weren’t in some way influenced by that,” he says. “Especially the ambient stuff; Pink Floyd were geniuses at that. But do we sound like Pink Floyd? Not really.”

In fact, Osborne is very wary of the Melvins being compared to other artists, especially those from the Pacific Northwest. “I don’t identify with anything, musically,” he says. I’m very much not a joiner; I don’t want to be part of anything. I’m a Groucho Marxist: I don’t want to belong to any club that would have me as a member.” 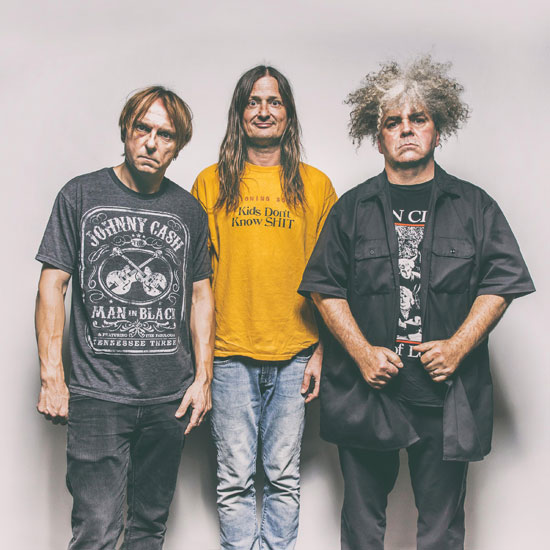 Washington and Oregon have a long tradition of hard-edged, heavy rock and rhythm and blues, from the Sonics, the Wailers and Paul Revere and the Raiders to Nirvana and Soundgarden. But Osborne bristles at the prospect of being labeled as part of that lineage. “There’s lots of crap bands up there too, so how do we explain that?” he asks.

Besides, he points out, he left the region 35 years ago. “I’ve made the vast majority of my music since I’ve lived in California,” he says. “So who do we blame for that?” The Melvins are also defiantly outside the mainstream of the current music industry. In an era that focuses on individual song downloads, a sprawling double-album/soundtrack is cheerfully out of step with current fashion.

“Not everybody wants music dictated to them by what they can download,” he says. Paradoxically, Osborne believes that more popular individual downloads become, the better it is for his band. “The more impersonal it gets, the more personal [our music] will be for people who like what we’re doing,” he says. “So it’s creating its own monster. I’m into it.”

The Melvins’ current dates are in support of A Walk With Love and Death (the album), but not the film. That’s because the latter hasn’t been released yet. A minute-long trailer for the short film debuted in April, but it’s anyone’s guess when the Jesse Nieminen film will see official release. “I’m not sure exactly when,” says Osborne. “But it’s coming. We’ve always thought, ‘our stuff is perfect for soundtracks,’ but since nobody was asking, we just did our own.”

In the meantime, a listen to Love should provide listeners with a mental movie; strange tracks like “Park Head” have a hypnotic, swirling feel reminiscent of early Flaming Lips audio experiments, and/or a particularity distressing and disorienting acid trip. Even though Love, Death and the film (when it’s finally released) are three physically distinct things, Osborne considers them as a single, unified work. “It’s very strange,” admits Osborne, “as it should be. We’ll make people uncomfortable; that’s what we want.”

After more than two dozen albums over the past three decades, Osborne has formed some definite ideas about the nature of fame. He takes issue with the very idea of “making it,” pointing out that “Chris Cornell made it; what did it do for him? He’s dead. Kurt Cobain, he’s dead. All those guys who have – in the traditional sense of the word – made it, all of them are dead. That is not what I want; I see nothing good about any of that sort of thing, nothing.”

Osborne is satisfied because he believes he’s holding up what he describes as his end of the bargain. “I get to play music for a living,” he says. “Therefore I will continue to make music, because that’s what I’m supposed to do. And I’m not going to stop doing it until I can’t do it or don’t want to do it.” The Melvins’ prodigious output suggests the latter won’t happen any time soon.