On her seven studio albums – from 11:11, her 2001 debut through her latest, Remember Us to Life, Regina Spektor has made a name for herself as a consummate composer of piano-based pop music in a singer-songwriter style. Her biography is far from that of the standard pop musician, however.

Born in Russia at the tail end of the Soviet era, she emigrated to the U.S. with her family when she was only 9 years old. Thanks to an organization called RIAS (formerly Hebrew Immigrant Aid Society), Spektor’s family was able to settle in the Bronx borough of New York City. Spektor had begun classical piano studies in Russia, but had to leave her piano behind when her family departed Moscow. Once settled in the U.S. Spektor continued her music studies; she would graduate from Purchase University’s Conservatory of Music in 2001, the same year she recorded the self-released 11:11. 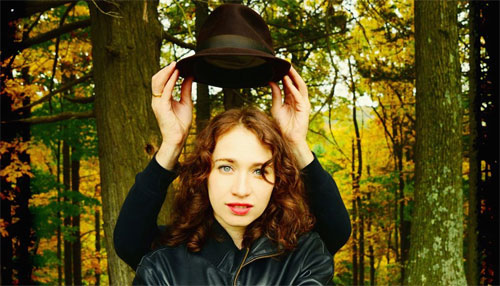 As a result of her background, Spektor identifies with the American immigrant experience. Not so much in the specifics of her own story, but in a wider sense. “Sometimes I think it doesn’t matter at all that I’m from Russia,” she says. “But it matters that I’m an immigrant. Because I have that experience of leaving a place.” She says that she sometimes relates more to someone who has recently emigrated from, say, Colombia than to a Jew whose family has been in the U.S. for a few generations.

“At this moment in our human history, we’re constantly being pushed to all figure out our identities into these neat little packages,” Spektor observes. She says that many people define themselves that way: “’Oh, I’m a Russian Jewish immigrant from [a given] year.’ I’m so much more interested in all the points in which we intersect.”

Spektor downplays the influence that her classical background would exert upon her original music. What that training did do for her, she suggests is allow her to “search in a different way – or different places” across the piano keyboard, looking for new melodies. But with or without formal training such as she had, “you still end up searching.”

Spektor observes that the versatility of a piano, coupled with the sheer volume of classical pieces she was required to learn during her studies, allows her to draw upon many different sonic textures. “The range is so big,” she says, and one’s playing can be anything from “muted and percussive to lyrical and very water-color-y.”

Yet in the end, Spektor doesn’t consider herself a classical musician. “They’re on this whole other level,” she says. What she got, ultimately, form her conservatory experience was a musical foundation. “I got to experience classical music first-hand, so the vocabulary and colors are available to me when I try to express myself,” she says. Classical studies “allowed me to know what’s possible.”

Even so, when Spektor is writing songs, she says that specific arrangement details aren’t in place from the beginning. The songs don’t come to her full formed. Ideas concerning whether a song will, for example, make use of a string section or other instruments develop over time. But she admits that “if you really through-compose things – which I, for whatever reason, tend to do – by the time I show up at the studio with the songs, so much of that is there.” She says that by “taking the chord apart,” she and co-producer Leo Abrahams can “kind of infer what some of the [instrumental parts] will be.”

Spektor spent her late childhood and teenage years in New York City. In that atmosphere, even years of intensive classical piano training didn’t keep Spektor from discovering and appreciating modern popular music. She’s on record admiring the work of Ani DiFranco and Joni Mitchell, and their work – along with many other singer-songwriters – has informed her own songwriting.

When it’s suggested that her songwriting style bears some similarities to that of Carole King – the singer-songwriter whose 1971 album, Tapestry remains one of the biggest-selling albums in pop history – she is circumspect. “Carole King is much more based in r&b,” Spektor believes, “and in that jazz world that I got exposed to later.” Spektor is certainly an admirer of King’s composition style, though. “What I really hear in her songs is how much she loves chords,” Spektor says, and how much she cares about harmony. I feel that way, too.”

Spektor began writing her own songs at age 16, and within two years she had found a way to combine her songwriting with her more formal skills as a pianist. Success came gradually; after self-releasing her first tow albums, she was signed by Sire Records in 2004. That label released her third record, Soviet Kitsch. The album received positive critical notices but did not chart. A live album (Live at Bull Moose) followed in 2005; it didn’t sell in great numbers, either, but it did help increase her profile and expand her fan base.

Things changed with the summer 2006 release of Begin to Hope; Spektor’s fourth studio release charted in 7 countries including the U.S. And the U.K., going Gold in four. By the next year, she was a featured performer at the Bonnaroo Music and Arts Festival in Manchester, TN. In addition to singing and playing piano onstage, Spektor occasionally played electric guitar as well.

Spektor views the various milestones in her career as points on a curve rather than ends in and of themselves. “I don’t think there’s ever a moment at which you ‘make it,’” she says. Making the point that success for musicians can be measured in so many different ways – financial security, personal growth, album sales – she finds the whole question of defining success a bit overwhelming.

As Spektor’s profile rose, she took the opportunity to expand her choice of musical instruments. Though her formal training focused exclusively upon classical piano, Spektor had an abiding interest in electronic keyboards as well. In fact, Spektor often works with an electronic instrument when composing. That choice is based on practical considerations as much as anything else, she says. “because I can do it at all hours, and I can play really quietly.” Spektor and husband Jack Dishel have a three-year-old son at home.

But there’s more to the decision than just wanting to let the toddler sleep. “Sometimes having the simpler sound without all the complexities of [an acoustic piano’s] partials can inspire a different kind of songwriting,” Spektor says.

“Maybe a chord I was hearing one way because of something resonating becomes very bare” on an electronic keyboard,” she observes. “And then the other way around, too: I’ll write something playing on the keyboard, and then when I play it on the piano, it becomes too muddy and complicated.” In those cases, she might end up using electronics on the album, as she did extensively on her 2006, album, Begin to Hope.

Spektor makes the point that for many songwriters, music is everywhere. “If you’re in the world of making music, you’re just going to hear [music] in anything,” she says. And what one hears colors the kind of music that is eventually written. “If you start hitting a soup bowl in two different places and create a beat, or if you’re playing an organ, you’re going to write a different song.”

There’s a sense of wonder in those experiences, Spektor believes. “I’ve always really liked when that happened,” she says. “It accesses a different part of your brain.” She notes, for example, that songs she’s written on guitar are very different than ones composed on piano.

Spektor does play guitar both in the studio and occasionally on stage, but keyboard-based instruments remain the primary focus of the conservatory-trained singer-songwriter. For about a decade now she says she has embraced synthesizers, too. She has a keen interest in samplers, keyboards that accurately reproduce the sounds of other instruments.

The use of samplers affects how a string part is arranged, too, Spektor says. It’s very different writing a string arrangement for a sampling keyboard rather than an actual string section. “You naturally go to certain chords; your fingers will move to a certain place on the keyboard.”

The idea of working with an orchestra seems to have piqued Spektor’s interest. After she wrote “The Call” for the 2008 film The Chronicles of Narnia: Prince Caspian, she visited London for the recording sessions. “I recorded it at Abbey Road Studios,” she says, “and I got to watch Harry Gregson-Williams conduct an 80-person choir. It’s an incredible world.”

Film scoring is another area that Spektor says she might explore sometime in the future. But she stresses that she wouldn’t get into it simply to check it off her list as something she’s done. Noting that “sometimes the score is the last thing added to the film,” she observes that it’s sometimes used as a way to make up for perceived shortcoming in the film itself. “If they wanted a scene to be really dramatic, but there’s something wrong and it just doesn’t feel like the climax of the story,, they might try to achieve that through the music,” Spektor says. Situations like that “put an inordinate amount of pressure on the music. And that wouldn’t be so fun for me.” She remains intrigued, though, at the prospect of film work, and would consider such a project “if there’s a resonance and a reason for it.”

Spektor has learned a great deal about working in the studio in the years since she made her first record. Rather than leaving the technical side completely to others, she has made a point of sharing production duties with her co-producers like Abrahams. That involved approach in the studio provides a good balance with the process of writing the songs, Spektor believes. “I love that I get to do both,” she says, “because composing is so specific.”

She notes that “The fun thing about the studio is that you can have vague ideas” about how a song should be arranged. “And then you could come across something that you never would have though of. But it just feels right, and you start building on that.” And often, everything is open to change. Even if she arrives at the studio with “every little word sitting where it’s going to sit, and every little thing is where it is, in the studio you get to deconstruct that,” she observes. “And sometimes it becomes something really different; that’s very exciting to me.”

Though Spektor writes alone for her own albums, she’s shown herself to be an enthusiastic and effective collaborator. She has recorded with a wide array of artists including The Strokes, Ben Folds, Sondre Lerche and Thomas Dolby. And in 2016 she recorded a cover of George Harrison’s Beatles-era tune “While My Guitar Gently Weeps” for the film Kubo and the Two Strings. Her philosophy on collaboration is a simple one. “I want to make sure that I’m able to help and be useful,” she says. “I would never want to do it just to do it.”

Spektor believes the guiding principle when songwriting is simple: there aren’t any rules. “Whatever feels right should be used to express yourself,” she says. “It doesn’t really matter what instrument you use, as long as you know that different things will access different parts of yourself.”