Hilary Scott Gets the Balance Right

Though she’s formally trained in classical and opera – she studied voice and piano in Italy – Washington state-based Hilary Scott chose the musical path of singer-songwriter more than a decade ago. From a very early age, Scott was more concerned with expressing her thoughts and ideas via words than playing with the other neighborhood kids. Most everyone assumed she’s grow up to be a writer of prose.

“I would come home from school,” she recalls, “and I would sit at my mom’s computer and write short stories.” Scott acknowledges that over the years she’s grown as a writer. “When I was really young, my songwriting efforts were almost always about my own feelings, my own reflections on the world,” she says. Scott acknowledges that approach is a fine way to start writing songs. But these days, she writes from the perspective of others in addition to her own experiences. “I think that’s what’s changed,” she laughs. “My songs have better stories now than they used to.” 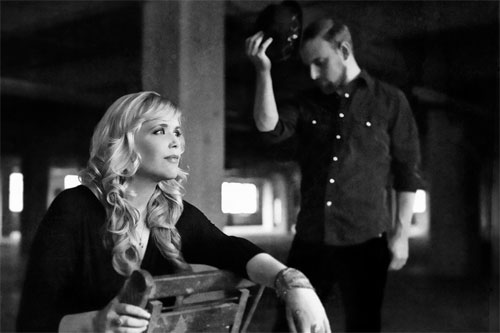 Scott put those skills together in support of her recent Indiegogo crowdfunding campaign. To help raise funds to make and release her 2015 album Freight Train Love, one of the premiums that Scott offered was a song written-to-order. “And it ended up being a very large portion of the funds that we raised,” she says. “I think I had 23 different individuals who paid for an original song or a cover!”

The songwriting prompts were often nothing more than a key word, phrase or theme; from there, Scott was left to her own creative devices to write a song. “It’s ended up being a great writing exercise,” she says. “I push myself outside of the stories I might ordinarily want to tell, whatever autobiographical things I want to write about.” That project has kept Scott busy, and she’s still not done with all the songs.

It’s often noted that singer-songwriters tend to be an introverted lot. That seeming paradox – an introvert being onstage in front of an audience – resonates with Scott. “The stage provides a distance, a barrier between you and your audience,” she observes. “So even though it seems like you’re being extroverted or exhibitionist, it’s still very much an intimate thing to be onstage and perform for people.”

Onstage performance is closely linked to the recording process for Hilary Scott. She prefers to develop her material onstage, only then taking it into the studio. “I have always felt that there’s a fine line between going into the studio too early and going in too late,” she says. While allowing that there’s something to be said for the studio capturing the energy of a brand-new song, she believes that “almost without exception, my songs really come into themselves through live performance. And the longer that I perform them live, the better that they generally become. So for me, the workshop is live performance.”

And even though on the surface there might seem little connection between her musical training and the music she’s made on more than ten albums, Scott believes that her time in Italy informed her approach to making popular music. “I was studying opera, so I was very focused on my classical music studies,” she says. She was also becoming fluent in conversation Italian. “I felt like I really started to understand the current culture when I could finally understand what the singer-songwriters were singing about,” she says.

Scott recalls a memory from early in her performing career, one that gave her encouragement toward a future as a singer-songwriter. “I played a festival, and I was the only opening act for Tanya Tucker.” Tucker and her band had flown in directly, and didn’t have their standard supply of CDs and t-shirts for sale. “I was the only artist who had any merchandise,” laughs Scott. “I sold a ton of records and a ton of t-shirts. That was definitely a night when I thought, ‘Oh, I could see this being a good thing!’”