Folk music gets welcome jolts of energy, modern pop culture and technology in the music of Shook Twins. The music of identical twin sisters Laurie and Katelyn Shook is built on a foundation of acoustic folk, but they deftly combine the traditional music form with samples, looping, beatboxing, and a rhythm section that gives the music real heft.

“We’re definitely drawn to the drop,” laughs Laurie Shook. “Katelyn and I have always liked heavy music.” That affinity was first demonstrated some time ago by Shook Twins’ decision to add a drummer and bassist to their group. Though he’s played upright bass in the past, with Shook Twins, Josh Simon holds down the bottom end with electric bass. “We always choose bass players who have a really nice groove,” Shook says. 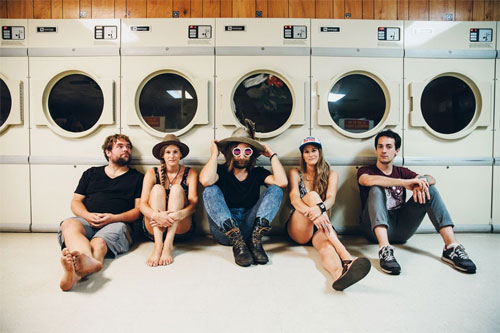 And drummer Barra Brown helps Shook Twins move their sound even farther away from traditional folk. “He works a lot with samples and drums pads,” Shook says. The group also makes effective use of electronic drum patches courtesy of a vintage drum machine/synthesizer, the ’80s-era Roland TR-808. “Those bring out the bottom end even more,” says Shook.

But despite the effective use of modern technology, Shook Twins are firmly rooted in folk traditions. And at the core of their sound are the sisters’ near-identical voices. Laurie Shook recalls an early experience back in the twins’ hometown of Sandpoint, Idaho. “I remember the first time we were in choir,” she says. “We were in fifth grade, and we both tried out for a solo. But our music teacher couldn’t decide between the two of us, so she had us sing it together in unison. And it just sounded like one person.”

To date, Shook Twins have released four albums and a digital EP; while all of those have been self-released, they’re currently shopping for a deal with a proper label. For their previous releases, they held off on taking that approach. Shook says that they had decided, “we could just crowd-fund something and do it ourselves and make more money in the end if a label isn’t going to be big enough to like really distribute our [music] as we are hoping.”

But as the group’s popularity has grown, the advantages of signing with a label become clearer. “It’s about the deal,” Shook says. “If it seems like it’s going to benefit us and our lives, we’re interested.” Kind words from high-profile fans can’t hurt Shook Twins’ bid for the big time. New York Times best-selling author Neil Gaiman cut straight to the heart of the group’s essence when he wrote, “I love the harmonies of the Shook Twins, the dreamlike songs that seem somehow permeated by the American Folk tradition, without actually being part of it. They make music that twines through your soul the way vines cover an abandoned shack in the woods.”

Like the group’s approach to making music, Shook Twins’ appeal extends beyond the confines of the folk idiom. In fact, they’ve become darlings of the jam-band scene. Laurie Shook is pleased about that, but she admits that it’s a bit perplexing. “Some of our songs have moments where we do a little bit of jamming, but it’s like, ‘this is the eight-bar solo section.’” She laughs and adds, “But it’s not like we take it for 64 bars.”

But then she backtracks ever so slightly. “We’re not not a jam band,” she says. “I don’t really know what we are! But we’re so pleased to be involved in the scene. All these bands get booked together, and we’ve developed awesome friendships with a lot of them.” Shook Twins play a lot of festivals, and return home annually for the Festival at Sandpoint. Shook thinks of festival gigs as a kind of family reunion. “People have their faces melted off by all the jam and funk,” she laughs. “And then we folk their faces back on.”