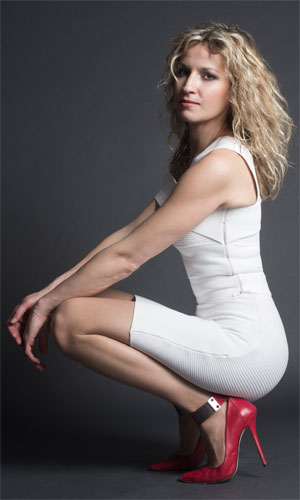 The label “hot blues guitarist” can be applied to Ana Popović in more than one way. The Serbian-born, conservatory-trained guitarist cuts an undeniably striking figure onstage with her short skirts and stiletto heels, but those visuals shouldn’t detract from the fact that she’s a skilled interpreter of a decidedly modern version of the blues.

Popović has been a professional musician for more than half of her 40 years. She put together her first band, Hush, in 1985 when she was living in her hometown of Belgrade, Serbia (then still part of Yugoslavia). But her immersion in blues – somewhat unusual for someone born and raised in Eastern Europe – began much earlier.

In those days, Yugoslavia was ruled by Marshal Josip Broz Tito; though the country was under a kind of Communist rule, Tito positioned the Eastern European country as part of the Non-Aligned Movement. Yugoslavia was generally viewed as less repressive than the Soviet and East German regimes. As such, Yugoslavian citizens could travel abroad with relative ease. “We used to travel a lot,” Popović recalls. “I was brought up to be a ‘citizen of Europe.’”

Ana’s father Milton was a serious fan of American blues; when the family would make annual visits to places like Holland, Germany and Belgium, he would often buy records and trade with other collectors. When they got home, those records would form the soundtrack of many parties with family and friends. “My dad was like a DJ,”  Popović says. She laughs when she recalls that her family was a bit unusual. “I would think that all of the rest of the people were listening to blues as well!” Her childhood was filled with the sounds of blues as well as soul and r&b. “I realized later: yeah, that’s not what the rest of Serbia was listening to!”

Popović’s earliest memories include hearing the music of Stevie Ray Vaughn, Jimi Hendrix, “all three Kings (Albert, B.B. and Freddie), Albert Collins, Bukka White, all of the roots stuff, the Delta stuff, and Chicago blues and Junior Wells, Buddy Guy.” To a young Ana Popović, that music was just “the regular stuff. It was only thing we had in our home; we never listened to Serbian music.”

Popović’s father is a blues guitarist, too, and he encouraged his children to sing. “He would get us around the guitars,” Ana says, “and so I was singing [songs by] Howlin’ Wolf when I was 3 or 4 years old. I learned those songs way before I could understand what they were meaning, and before I [learned] English in school.” She recalls that while the male members of those family-and-friends gatherings appreciated all of the legendary blues guitarists, the women – “my Mom and all our other cousins” – liked Stevie Ray Vaughan best.

“There was something [about] the production of those records that was different: it was modern,” she says. “And I thought, ‘If I ever do music, I would want to have that sort of music [which] will unite not only the players but also people that are not players. People who just enjoy the good arrangements and good sounds. That was something that I [discovered at] a very early age; I noticed the difference.”

By the time Ana was 12, she had already picked up the guitar. Learning songs by Elmore James, Robert Johnson and even modern-day bluesman Sonny Landreth, Popović initially developed her skill as a slide guitarist. She recalls that at her father’s living room jams, “I was the only slide player, so every now and again when they would play a slide song I would be the one to play [that part]. I would take a little part of the jam session. And that’s how it started.”

In school, Popović studied graphic design; that was her planned career path. But eventually she decided to change course. “I formed my own band when I was about 18, so that’s when I really started playing solo guitar. And then I realized, ‘You know what? I am just going to study music and go for it 100%.’” Soon she left for Utrecht, Holland to study at that city’s Conservatory. But while enrolled, she missed quite a few exams and assignments because of gig commitments. “I had a lot of shows right from the beginning; it was difficult to coordinate both study and playing live,” she recalls. Once her music career took off, she left the Conservatory.

Speaking of which, while Popović earns consistently positive reviews for her albums, charges of “inauthenticity” do come up now and then. It’s worth noting that (to cite the most obvious example) Eric Clapton wasn’t exactly born and raised in the Mississippi Delta, but being a musician from Eastern Europe does seem to subject Popović to some skepticism from blues purists.

But her response to that reality is a bit surprising, too. “I don’t hear that,” she says. “This is a surprise to me.” She writes off this alleged criticism as nothing more than difference of opinions. “It’s okay that they like something better than the other,” she says. “I am at all not bothered by it. I invest time in my style, and whoever likes it, that’s great.” And as for those who don’t like her style, Popović suggests that “there’s a whole lot of other guitar players that you can like.”

That style of hers is informed by much more than blues, after all. “I have a perfect excuse to be different and to try myself in different genres,” she says. “I’m not born in Chicago, [so] they don’t expect me to be Chicago Blues. I’m not born in the Delta, so I make full use of that. And I am a modern artist.”