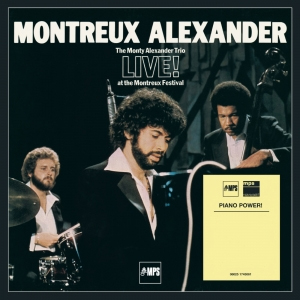 Alexander’s seventh release for MPS, Montreux Alexander is a document of the pianist’s trio live at the Montreux, Switzerland Jazz Festival in June 1976. As the liner notes explain, neither Alexander nor his rhythm section – bassist John Clayton and Jeff Hamilton on drums – had any advance idea of what songs they would perform. The sharpness of the performances belies that; while there’s a palpable sense of spontaneity on the six well-known tunes in the trio’s set, it’s all impeccably played. A ten-minute reading of Ahmad Jamal‘s “Night Mist Blues” is an effective melding of smoky, late-night club ambience and sophisticated polish. Every now and then, Alexander breaks out of the bluesy mold – often for a mere measure or two – and delivers his melodic lines in another style.

Perhaps Morris Albert‘s “Feelings” was less of a cliché in the mid ’70s than it is today, but Alexander’s trio gives the song a suitably understated reading that makes it more effective than it would otherwise be. Still, it’s the weak point of the set, veering uncomfortably close to easy-listening lounge jazz. It’s redeemed slightly by Alexander’s silky-smooth delivery.

Duke Ellington‘s “Satin Doll” enlivens things greatly. The tune jumps and swings, and the uptempo blues arrangement features some tasty three-way musical dialogue between the musicians, eliciting applause less than a minute into the tune.

Nat Adderley‘s classic “Work Song” is oddly understated for its first 20 seconds or so; from there it blasts out of the gate. Playing more subtly than in the typical readings of the song, Alexander’s trio still has some fun with playful key changes. Clayton’s bass is showcased here.

Henry Glover‘s 1956 composition “Drown in My Own Tears” had, by 1976, been recorded by many artists including Ray Charles and Aretha Franklin. Alexander mines the tune’s gospel roots, calling to mind – but not aping – Charles’ reading of the chestnut.

The set closes with the American traditional “Battle Hymn of the Republic.” After Alexander plays a brief melodic figure, Hamilton takes the cue and dives in with some nice brush work of his own. After a minute or so of back-and-forth, the band kicks into a swinging rendition that brings the house down. Deftly-placed glissandi up the ante, and the crowd responds in kind. Nearly 30 seconds of applause wraps up the release, available on 180-gram vinyl in a beautiful, sturdy (albeit non-gatefold) sleeve.