Home  »  interview • new release • pop • world   »   David LaMotte: Bringing it All Back Together

David LaMotte: Bringing it All Back Together

Prior to 2006, David LaMotte was an extremely busy musician. “In those first 18 years, I kicked out 10 records,” he says. But in the decade that followed, he would released exactly zero albums of new material. It wasn’t as if he had gone inactive, or had even stopped writing music; he was simply involved in other pursuits. But the Black Mountain-based singer-songwriter’s long spell without new releases ended September 2 with the release of The Other Way Around, and a concert at Asheville’s Diana Wortham Theatre.

That decade away from recording and performance found LaMotte, his wife and their 10-week-old son traveling the globe. “I moved to Australia to [earn] a Masters Degree in Peace Studies,” he says. He also spent time with a development organization in India. “When we got back to the States,” LaMotte explains, “I got wrapped up in stuff that was important to me.” He wrote a book, Worldchanging 101. He and his wife started a nonprofit organization, PEG Partners, to support education in Guatemala. “And being a dad occupies a lot of time, too,” he beams. 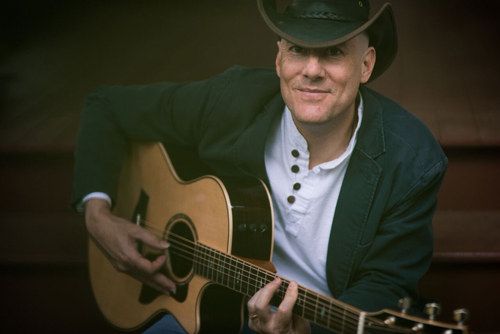 But music continued to tug at LaMotte. “I kept writing songs all the time.” To have done otherwise, he laughs, “would have been unhealthy, a bad idea.” He began performing again around 2012. By the time LaMotte made the decision to record and release a new album, he was stunned to realize that an entire decade had passed.

LaMotte continues to be deeply immersed in his roles as speaker and author; making music simply has to find its place in that mix. When he’s booked as a speaker, he’s sometimes asked to weave music into the program. “I’ve tried that a few times,” he says. “It seems like it ought to work. But it’s a trainwreck. I’m talking about things that are fairly academic, stacking ideas on top of each other. To stop in the middle of that flow, when I’m getting passionate about that, just doesn’t work.”

But there’s unmistakably a good bit of overlap in the worldview LaMotte brings to his various pursuits. Asked to illustrate that overlap in the form of a Venn diagram, he makes two thumb-and-forefinger circles, and overlaps them nearly completely. The energy and messages “are complementary,” he says. “The peace and justice work with which I’m involved is really about re-humanizing each other. And even though we all have different experiences, we’re all painting off the same palette of emotions.”

The Other Way Around tackles many of these big-picture themes, but LaMotte’s approach is subtle. “I don’t like songs that are all message-y, that hit people over the head.” His songs almost always have a point, “But I want to make the point artfully, in such a way that people can interpret it as they like.” He prefers to write “from an oblique angle, leaving room for the listener’s experience.” LaMotte recalls the best stagecraft advice he’s ever received, one night long ago at Asheville’s Grey Eagle music hall. Bill Melanson of the Billys told him, “I want you to strike these words from your vocabulary: ‘This is a song about…’”

LaMotte’s new album brings together the fruits of his efforts in one particularly notable way. He first met the 12-year-old José “Pepe” Patzan in Guatemala, at a music school that PEG Partners had co-founded. Patzan went through the school’s entire course of study; today he is a professional musician and teacher. Patzan plays marimba on the track “Angelita.” LaMotte is visibly proud of having played a role in Patzan’s life.

LaMotte’s new album features guest musicians from around the world. The Diana Wortham concert marked the official release of The Other Way Around, and the show featured a long list of well-known guests including Leeda “Lyric” Jones, BJ Leiderman, Tom Prasada-Rao, Ian Ridenhour and many others.

Connection between people has always been key to LaMotte’s music; even a quarter-century ago, he was self-releasing his albums, directly building relationships with listeners. The Other Way Around continues that approach; the album was crowd-funded via a successful Kickstarter campaign. “We all have a lot of the same hopes and dreams,” LaMotte points out. He believes that music helps bring people together via shared experience. “It connects our hearts.”