The primitive side of rock ‘n’ roll informs Ron Gallo‘s music as showcased on RG3 – EP, a three-song preview of his upcoming album Heavy Meta, due out in August. A self-described musical late bloomer, Gallo says that his early exposure to music was limited to “Top 40 radio. ’90s one-hit-wonder golden hits. There’s really not much in those early years to take from beside the obvious stuff,” he chuckles.

In college, Gallo dug deeper into music and music history. Whatever he listened to, what comes out in his music bears the influence – however subtle – of some important artists. The backing vocals on the hard-rocking “Kill the Medicine Man” are reminiscent of the Beatles‘ “Helter Skelter.” And Gallo’s overall musical approach recalls the wild post-Big-Star work of Alex Chilton. 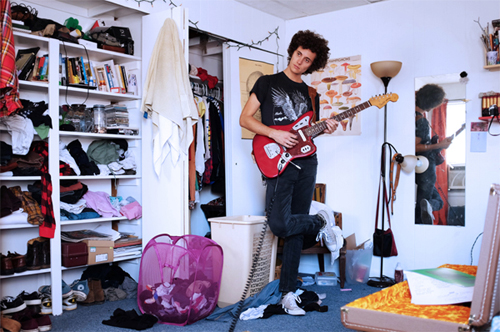 “I know some chords, and I utilize about one scale,” Gallo freely admits. “I’m trying to evoke primal sounds from the instrument as opposed to being gentle and playing with finesse. That’s a lot more fun for me than learning scales.” In his music one can hear which side of the head-vs.-heart divide he comes down on. “I lean that way entirely,” he says.

Gallo and his band bring that primal approach to the stage whether it’s a coveted spot on the Bonnaroo Festival lineup, or an intimate gig at Bushwick’s Alphaville. “It doesn’t matter where we play,” says Gallo. “Ultimately it’s going to be the same thing energy- and effort-wise.”

Though he’s currently based in Nashville, Gallo spent his formative years in Philadelphia. He sees some parallels between Philly and Brooklyn: “gentrification, development, artisanal chemistry coffee shops, boutique hotels, fancy restaurants, farm-to-table.” He thinks he knows why some Brooklyn hipsters are relocating. “I guess it makes sense: in Philly, you pay a quarter of what you’d pay to live in a shoebox in Brooklyn.”