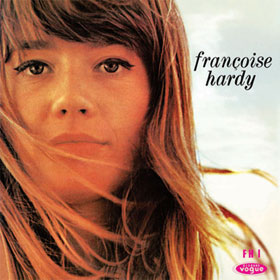 Le Premier Bonheur du Jour (aka Françoise Hardy)
A critical and commercial success at home (and modestly so beyond France’s borders), Françoise Hardy‘s debut led quickly to a follow-up album. Released in October 1963 and again featuring only the artist’s face and name on the cover, not unlike a fashion magazine (so that’s where Peter Gabriel got the idea!), the album is now known (and titled on the new Light in the Attic reissues) as Le Premier Bonheur du Jour (“The First Day Happiness”) after its single. (In the UK the record was released 1964 as In Vogue.)

Nearly half of the record’s twelve tunes are solo Hardy compositions (both music and lyrics). The arrangement approach expands in many directions from the relatively monochromatic character of the debut. More ambitious and prominent orchestration are hallmarks of the single and “Va pas prendre un tambour,” another Jacques Dutronc number.

Hardy and producer Jacques Wolfsohn seem to have absorbed some influences from outside France for both their musical approach (“Va pas” sounds a bit like a Ricky Nelson track) and the songs themselves. Both Paul Anka (his “Think About It” rewritten here as “Avant de t’en aller” [“Before You Go Away”]) and Burt Bacharach/Hal David (Timi Yuro‘s 1962 hit “The Love of a Boy” translated to “L’Amour d’un garçon”) are drawn upon for material. Anka’s tune features prominent backing vocals (likely overdubbed by Hardy), something rarely found on previous Hardy tracks.

The Françoise Hardy original, “Comme tant d’autres” (“Like Many Others”) is peppered with some well-placed jazzy organ fills reminiscent of Brian Auger. Another original, the gentle “J’aurais voulu” (“I Would Have Liked”) makes effective use of nylon-string guitar; the arrangement conjures visions of Hardy strolling contemplatively through a field while she sings.

The exceedingly brief (1:43) “Nous tous” (“All of Us”) displays some peppy drum work that threatens to – but never quite does – rock out. Hardy’s trademark delivery keeps things firmly in check. “L’Amour d’un garçon” features brass, horns and soulful girl-group styled backing vocals (definitely not Hardy), and while on paper that description suggests an arrangement that could overwhelm the singer, such a thing never happens. On the outro, Hardy comes closest yet to singing in English with a couple of “woah-oh” vocalizations.

The melodramatic “L’Amour ne dure pas toujours” (“Love Does Not Always Last,” another original) is like nothing in Hardy’s previous work. Assertive organ work all but duets with the vocalist; even when other instruments and wordless backing vocals join in, the song is all about the dialogue between Hardy and the haunted-house keyboard. A French adaptation – by Hardy – of the Connie Francis hit “It’s Gonna Take Me Some Time,” “On dit de lui” (“It is Said of Him”) features some out-front twangy guitar (with wah-wah pedal!) and wop-dat-doo-wop backing vocals that suggest a French Jordanaires. 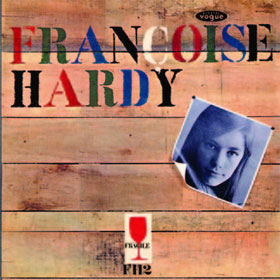 Mon Amie la Rose (aka Françoise Hardy)
Hardy kept up both her release schedule and her practice of self-titling all of her albums with this October 1964 disc. Again recording with Jacques Wolfsohn as producer, this disc – her most varied yet — found Hardy working with the Charles Blackwell Orchestra. What she did change was the recording studio; leaving for the first time (at least for her francophone releases) the confines of Studio Vogue, Hardy crossed la Manche and landed at Pye Studios in London, the same place that The Kinks cut their records in those days.

Again featuring a mix of originals and outside compositions, Mon Amie la Rose relies more on French composers for the latter. Released stateside with different cover art in 1966 as Maid in Paris (and elsewhere as Fantastic Françoise), the disc features the hit “Dans le monde entier.” An English-language version of the song (“All Over the World”) became a hit in English-speaking countries including the UK, where it went Top 20 in the spring of 1965.

The record’s sound moves closer to a sort of Gallic folk-rock; the shimmering, insistent acoustic guitars and soaring massed vocals of “Je veux qu’il revienne” (“I Want Him Back”) aren’t radically different from The Seekers or even The Mamas and The Papas. With its country and western feel – including syrupy strings and moaning chorus vocals – Hardy’s orignal “Tu ne dis rien” (“You Say Nothing”) feels like a Marty Robbins tune. And “Et même” (“And Even”) unabashedly horns into Phil Spector‘s wall of sound territory, with rumbling tympani and perhaps more instrumentation than is found on any other Hardy song. Hardy remains calm and controlled and above it all, somehow. The sexy go-go ambience of “Pourtant tu m’aimes” (“Yet You Love Me”) traffics further in girl-group sound, and its arrangement seems custom-made for a film soundtrack.

“Pars” (“Leave Off”) is an understated, acoustic number that leaves the modern-day listner wholly unprepared for the next track (on the original record, this is the point at which listeners had to flip the disc). “Je n’attends plus personne” (“I Expect Nobody”) is Hardy’s French adaptation of an Italian tune, “Non aspetto nessuno” (a slightly different translation yields “Not Expecting Anyone”). Featuring some shockingly nasty fuzz guitar riffage, it starts out sounding like some sort of French blues. But as the tune unfolds, it heads in a completely different adult-pop direction, albeit with that fuzz guitar, buried as it is under strings. But then the guitar solo hits – courtesy of a studio musician called Jimmy Page — and it’s a crazed, amped-up, hard rocking thing that must have knocked Hardy’s longtime fans out of their chairs. The drums swing pretty hard, too. The sounds on “Je n’attends plus personne” are nothing short of radical for 1964.

The remainder of Mon Amie la Rose lets listeners catch their breath after that stylistic left-turn. Pizzicato strings and a folk rock approach not unlike Lulu are hallmarks of “Nous étions amies” (“We Were Friends”). A Spanish flavor pervades the title track, which closes the album.

Predating the multiple-language release strategy that Apple Records would employ for Mary Hopkin, Hardy followed up Mon Amie la Rose with yet another foregin-language disc, this time singing in German: In Deutschland was released in September 1965. Unlike Françoise Hardy canta per voi in italiano, this record featured new songs alongside German-language versions of earlier material. (The Light in the Attic series focuses strictly on Hardy’s French releases of the era, so In Deutschland is not part of that set, and is not covered in detail here.)