Since their debut in the mid 1980s, Atlanta-based Drivin N Cryin have crafted their own take on southern rock. Led by guitarist/songwriter Kevn Kinney, the group has distilled its many influences into a sound that is all their own. A recent series of EPs set out to explore those various styles, and selections from those CDs have been compiled on the new vinyl-only release, Best of Songs.

With more than two dozen songs released on those EPs between 2012 and 2013, Kinney had a lot to choose from when sequencing Best of Songs. “I tried to keep it kinda poppy,” Kinney says. “We designed it to look like a 1970s K-Tel record…upbeat and groovy. So I focused more on our power pop type stuff.” 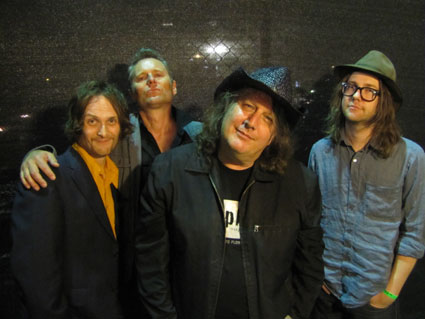 The motivation for that original EP series was twofold. Because two years between albums can seem a lifetime in pop culture, shorter and more frequent releases keep a group in the public’s mind and ears. But there was another reason for smaller musical servings. “Twelve songs is too many songs,” says Kinney. So does he think that the era of the album is over? “I don’t know if it’s over,” he says. “I just don’t know if it’s necessary. If Lucinda Williams wants to put out 40 songs, twelve songs, or five songs, that’s cool with me. It’s gonna end up on my iTunes anyway. If I like it, I’m gonna put it on my playlist. I’m gonna construct my own thing.” That thinking influences Kinney’s ideas for future releases. “Maybe I’ll do a series of 45s in the future, one every two months or so.”

Each of the four Drivin N Cryin EP releases focuses on a musical style. “The first one is ‘kudzu rock’n’roll’ like R.E.M., Fetchin’ Bones, and all of our heroes of that era,” says Kinney. “The punk rock one is our hard rock side. And the psychedelic one is pretty obvious.” A fourth, Songs for the Turntable, is a five-song stylistic grab-bag. “I wanted to deconstruct the band through those EPs,” says Kinney. “Because if any band needs to be deconstructed, it’s Drivin N Cryin. And if I can do anything to confuse the audience even more, that’s what I want to do!”

After having released seven albums on major labels (Island and Geffen) followed by several on smaller labels, Drivin N Cryin chose to release Best of Songs on Plowboy Records, a small indie label that features Cheetah Chrome (of punk legends The Dead Boys) as its A&R guy. Kinney muses on the difference between indies and the majors. Smaller labels allow the artist more creative control. “Because,” laughs Kinney, “No one’s giving me a hundred thousand dollars. If they give you $100k, you gotta let them have their input. Which is not good.” He repeats for emphasis. “It’s not good.”

Kinney says that guitarist Sandler Vaden was a star of – and a motivating force behind – the songs on the EPs and Best of Songs. “Sadler co-produced almost all of these EPs with me. He co-wrote and played guitar, and he played bass on some of the tracks. This guy is a genius. We had him in our band, and I knew that this kid was gonna be big. What was happening was like lightning striking. So I wanted to make as many records, as fast as I could, with the guy while he was with us. This kid is gonna be a famous producer someday. You’re gonna hear about him for the rest of your career, his career. I just love the guy. He’s somebody who I wish I had to work with back when I was 19 or 20.”

With the amicable departure of Vaden – “Now he’s with Jason Isbell and the 400 Unit,” notes Kinney – Drivin N Cryin has brought Warner Hodges, guitarist with another southern institution, Jason and the Scorchers, on board for touring dates. After more than ten Drivin N Cryin albums, four group EPs and eight Kevn Kinney solo albums, what’s in the future for the band? “This is our last project for awhile,” says Kinney. Catch them while you can.

An edited version of this feature was published previously in Mountain Xpress. Tomorrow I’ll run my entire original Q&A with Kevn Kinney. — bk