Girls Rock Asheville (girlsrockasheville.org) is a six-day camp for girls ages 8 to 16. With no previous experience required, campers learn about making music, and working as a team. The 2015 camp culminated in a pair of showcase concerts at The Mothlight on Saturday, June 27.

The Girls Rock concept began as a college thesis project. “It started with a question,” says Girls Rock Asheville’s Executive Director, Erin Kinard. “’Can we do this?’ The answer was yes.” Soon thereafter, the first camp took place in Portland, Oregon. Today, says Kinard, “There are over sixty camps worldwide, including programs in Peru, Iceland, Austria, and twelve in Sweden.” Kinard got involved in the program through a friend. “One of my high school friends became the Executive Director of the organization in Portland.” After volunteering there, Kinard moved to Asheville with plans to start a camp here.

“I had been advised to take an entire year to plan,” says Kinard. “So we were originally thinking about 2015.” But once she put out the word out about her plans, “the momentum was so strong that we asked ourselves, ‘Why can’t we just do it now?’” The first Girls Rock Asheville (GRAVL) camp took place in July of last year. That camp included 34 girls; this year 36 girls will take part in the program.

GRAVL 2015 begins with band formation, an activity that Kinard calls “the craziest part of camp.” After soliciting musical genre ideas from the campers, the entire group takes part in a sort of musical-chairs activity. “When the music stops, you group up with the people around you, and have a little talk about [a specific music genre]. We do that four or five times, and then the last time, we tell them, ‘Now run to the genre you want to play.’ And then from there, groups are formed.” Kinard adds, “Maybe there are some tears, maybe not. Hopefully not. It went perfectly last year.” 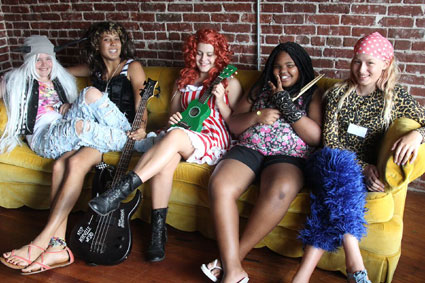 Because no prior musical experience is required to participate in GRAVL, the camp features an “instrument petting zoo.” The girls take some time to explore various musical instruments. “Other camps assign the bands and instrument,” notes Kinard. “That might be smoother, but we feel that our way is more about the girls’ personal experiences.”

Kinard emphasizes that GRAVL is “an organization for women and by women. A lot of times, [society teaches] women to compete, and to tear each other down. We feel it’s very important for girls to see women working together, leading, being strong in their roles.” The camp also offers full and partial scholarships to economically disadvantaged girls. “No questions asked,” she adds. 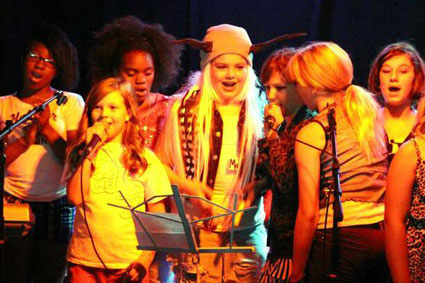 Erin Kinard and her GRAVL colleagues have even more ambitious plans for the future. “We’re hoping to launch a Ladies Rock Camp this fall,” says Kinard. That weekend event raises funds for scholarships. And they hope to expand the program to two sessions beginning in 2016. “The demand is there,” says Kinard. “It’s just a matter of staffing it.” If funds and resources allow, the Girls Rock Asheville organization hopes eventually to offer an after-school camp and an overnight program.

As a not-for-profit venture – Girls Rock Asheville is in the process of applying for 501(c)(3) status – the organization depends on community support. “Right now,” says Kinard, “the most pressing matter is food donations.” The need for donated – or even loaned – musical instruments and audio gear is a close second. There’s an especially urgent need for guitar and bass practice amplifiers.

Yet another way to support the work of Girls Rock Asheville is via purchase of tickets to the showcase at Mothlight. “Capacity is 350 people,” notes Kinard. “Last year, a lot of people were turned away. We definitely [didn’t] want that to happen again. So this year, [we did] two shows on Saturday, June 27: one at 2pm, and one at 3:30.”

(An edited version of this feature appeared in Mountain Xpress.)