In those years, music as a professional pursuit was never a goal. Leah Song says that even when she and sister Chloe Smith did begin making music, “we were just trying to create a project that paid homage to all of our musical influences. It was only later – three or four years into the project – that we said to ourselves, ‘Okay: we’re really going to take this seriously, crafting and cultivating what we want to be doing. Let’s think about what we want our lyrics to convey.’ And in that sense, all of those [earlier] travel experiences were important. And will be forever.” Rising Appalachia endeavors to tie in world culture. “We want to represent the South,” Leah acknowledges, “but in a context with the rest of the world.” 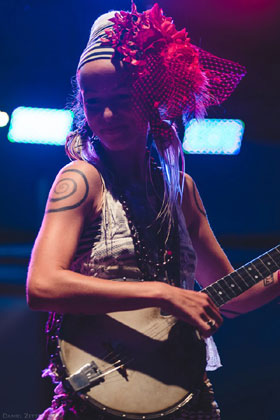 Rising Appalachia manage and produce themselves. From the beginning of their recording career, they’ve made a conscious decision not to take part in the machine, in the music industry as it used to be known. Based on the current state of that industry, the business choices that the sisters made in 2006 show their prescience in opting to stay outside many of the traditional distribution channels for music.

“We have a really hilarious and wonderful relationship with all of that,” Leah laughs. “We recorded our first album [2006’s Leah and Chloe] in a day.” They recorded the album as a gift “for our dad, who was having a hard time. We had both left our home city, and we wanted to do a project that tied in all of our parents’ musical influences. And ours, as well. We recorded it in a basement with some friends, and made several hundred copies. We figured, ‘Cool. That was fun. We’ll be able to sling those albums for the next fifteen, maybe twenty-five years.’”

But that’s not how the story developed. “We were at a music jam. It was a once-a-week thing at a pub in Atlanta, and we were singing with our mom. The director of a Celtic Studies program came in.” He wanted Leah and Chloe to perform at a three-day concert festival that featured musicians from around the world, representing different forms of Appalachian and Celtic folk music. Leah chuckles as she recalls what the man said: “I want you to represent the young face of Appalachia.”

Leah thought the guy was crazy. “We hadn’t ever sung into a microphone at that point. We hung out in Atlanta. We sang folk music with our parents! It was like, ‘this isn’t…we don’t…we can’t.’ But…we did. We sang onstage with Grammy award-winning musicians at this showcase for about 700 people, three nights in a row. I was okay [regarding] stage fright; Chloe had some issues with stage fright. But we sold all of the albums that we had made at that show.” 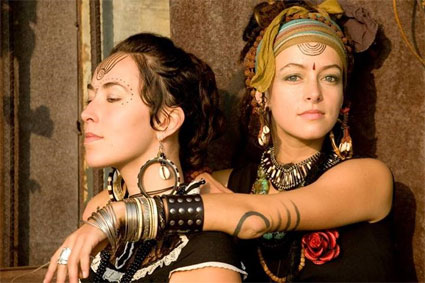 The performance earned the sisters – at this point about 20 and 24 years old – some attention. They were approached by a record label that had been a big part of the festival, and that played a leading role in the emerging Americana music scene. “We went to Nashville,” Leah says, “and met with this record label. Chloe and I went to a dive bar afterward, and had a beer. We thought about it, and really talked about it. We thought, ‘We could sign this contract, and we would be handed a silver-platter career. We would be billed as those harmony-singing sisters who play folk festivals all around the world. We would be a well-supported project without having to think much further about it.’”

“And,” recalls Leah, “we said no. We decided, ‘if we want to do this, we want to do it on our own terms. We want to learn what we’re doing, and then decide how we want to do it.’ We didn’t really want fame, glitz, glamor. But,” she smiles, “it was nice to be asked.” 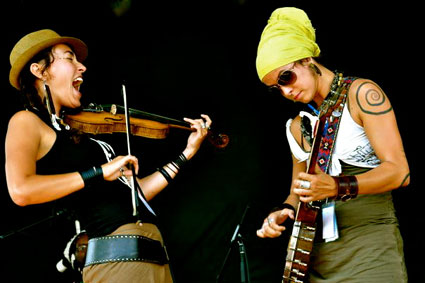 Leah reflects on what signing that contract might have meant. “We might have been turned into some sort of pawn. In those early days, we knew that our combining of folk music, Appalachia, hip-hop, blues and jazz was weird. And rare. There weren’t a lot of people who had all of those things in their upbringing since they were two years old. And we knew that there was no genre for that.” The music industry, on the other hand, often likes to put its artists into boxes, to give decisions about musical direction over to marketing people. This is especially true where attractive female artists are concerned.

“We were very aware that we were marketable,” Leah admits, “in our story, and our…aesthetic,” she laughs. “But we were not marketable in our genre. For the first several years that we worked, it drove the places we’d play crazy: ‘We don’t know where to put you.’ And we wanted to figure that out.” In the end, she says that “it took years for people to write about our music correctly, to not write ‘Girls with banjos! Playing bluegrass! And then they throw in this crazy, wonky, weird beat!’” Bemoaning the pandering aspect of some genre-fusion music (“It’s so piecemeal and awkward!”), Leah says that Rising Appalachia strives to “give air to what we hear, which is a very strange and wonderful conglomeration of influences.”

Continuing to embody the DIY ethos, Rising Appalachia has been at the forefront of self-funding and crowd funding. Recorded at Asheville’s Echo Mountain Studios, Wider Circles is being crowd funded to the tune of $30,000. “This will be our second Kickstarter project,” says Leah. “Our first one was a really amazing honor, and very exciting. When we got to a place where we were ready to record this album, we thought long and hard about [whether or not to do] a Kickstarter. Because we’re not really interested in taxing our fan base. We don’t like to always be asking; we’ve been taught to be self-sufficient. And we did have some funding opportunities; we did have some donors who were interested. So we round-tabled it: Chloe and I will sit and have a glass of wine, and philosophize until we we get to how we want to move forward.”