Anything that achieves that level of success is a rich target for parody. And where E.L. James’ book is concerned, the most spot-on skewering of 50 Shades the book – and 50 Shades the marketing juggernaut – is the stage show, 50 Shades! The Musical Parody. A team of writers and choreographers with backgrounds in The Second City and Baby Wants Candy comedy troupes devised the musical as equal parts send-up and tribute. “There was a news story about the book every night, it seemed,” says Emily Dorezas, one of the parody musical’s producer/director/writers. “And then once we realized just how dirty it was, we thought that the juxtaposition of making it a musical felt like the right thing to do.” 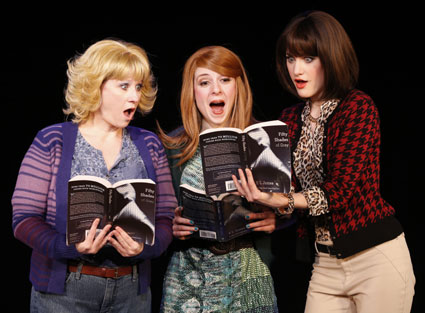 Many reviewers have pointed out that while author James vividly describes BDSM and other activities, she betrays a paucity of imagination concerning such matters as word choice. There’s even a drinking game in which participants read aloud from 50 Shades of Grey, pausing to knock back a shot every time Christian Grey “cocks his head” or “steeples his fingers.” Dorezas is diplomatic on the book’s literary merits, and chooses her words with care. “It’s…not really plot-driven,” she allows. With that in mind, the parody’s writers devised a plot of their own. “The book club ladies are a kind of framing device,” Dorezas says. “And one of them goes through a change after reading the book. We wanted to show some growth in the characters, because if we were just making sex jokes, that would get old in about five minutes.”

Fans of sex jokes need not fear, however: 50 Shades! The Musical Parody is stuffed with innumerable laugh lines. An offstage announcer welcomes ladies, and then – after a pregnant pause – adds, almost as an afterthought, “…and gentlemen.” “I think we do a good job of getting across that this is a super-dirty show. Nobody ever brings kids,” Dorezas observes. “Now, husbands and boyfriends…that’s a different story. They’ve heard about the book, but sometimes they don’t quite know what it’s about. But a lot of men take the time to contact us after the show. I always quote the guy who wrote, ‘The party hasn’t stopped since we got home. And that was four days ago!’ We hear more from husbands than from wives.”

For those who haven’t read the book but are curious about the parody musical, Dorezas likens its sensibility to the approach South Park creators Matt Stone and Trey Parker employed with their smash stage hit The Book of Mormon. But Dorezas notes that the book upon which that show is based “has been around a long time, and it’s not as silly” as 50 Shades. 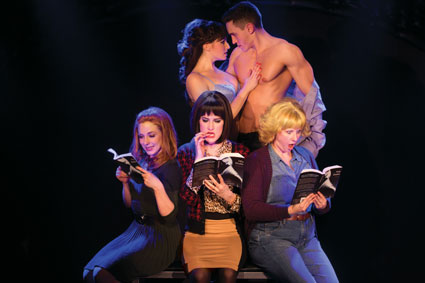 Emily Dorezas’ take on E.L. James’ first book differs from the critical consensus in a fascinating, perhaps unexpected, way. James “did self-publish the book,” Dorezas points out. “Sometimes people challenge it from a feminist point of view, because it’s about a woman in a submissive position. But one of the best depictions of feminism I can think of is E.L. James’ approach: ‘Oh, you don’t like it? I don’t care; I’ll publish it myself! I don’t care if you think it’s trash; I believe in it.’ And obviously she’s gotten the last laugh.”

Whether or not James has gotten laughs from this unauthorized parody is unknown. “I know she knows about it, but she hasn’t seen it,” Dorezas says. “But from everything I’ve heard, she has a great sense of humor. I think she’d have a great time at our show.”