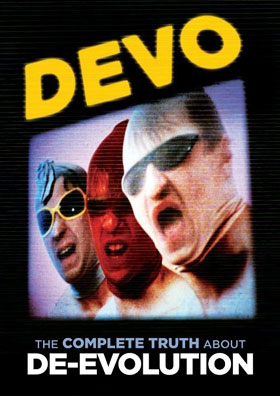 Beginning in the 1970s, DEVO established themselves as among the most effective artists using using the creative tool of video in the musical idiom. Contrasting starkly with the the myth-making and glamor of most other music videos, the work of DEVO is deeply unsettling and provocative. Twenty DEVO music video clips (plus some relevant extras) have been compiled on The Complete Truth About De-evolution.

DEVO’s philosophical sensibility is shot through all of the band’s video work. The concept of de-evolution as used by the group (and from whence comes their name) holds as its central concept the idea that humankind is no longer evolving in a forward direction; instead, we’re on the decline. DEVO has always been as much an art installation as a band; in keeping with the punk aesthetic (the band’s first video clip debuted in 1976) the band employed a DIY musical aesthetic that eschewed virtuosity in favor of a harsh, brittle, discordant and often deceptively simplistic sound. That approach would have certainly been part of the appeal to fellow musical outsider Brian Eno; he produced their first album.

Most of the video clips as collected on The Complete Truth About De-evolution are low-budget affairs; even when the band hit it big and had a Warner Brothers-financed budget, their more costly videos still had an intentionally homegrown look about them. Though professionally executed, the stop-motion sections of “Love Without Anger” (oddly enough, a staple of early 80s MTV) are reminiscent of the crude animation found on early DEVO clips.

And what all of the group’s videos share is that world view that concedes – no, celebrates, really – the idea that everything is shit, that we’re headed for the dustbin of history. Nowhere is this better illustrated than in what may well be DEVO’s finest video clip, the one made to support the song “Beautiful World.” Thick with irony (or sarcasm; your choice), the video displays police beatings, KKK rallies, and atomic detonations, all providing a visual backdrop for lyrics that (on the surface, at least) express what a “sweet romantic place” the world is. With DEVO, satire is always a central element, or at least a tool that’s kept handy.

The early clips – that is, the ones that predate MTV’s summer 1981 launch – have gotten much less exposure, though some of them surfaced on the USA cable network’s night time music-centric program Night Flight. Still, most casual viewers won’t have known that these clips (such as “DEVO Corporate Anthem” and “Jocko Homo”) even exist. And while they’re very different from later, more commercially-oriented material like the tres bizarre “Whip It” video, the band’s bent approach is consistent through all of the clips.

And as seems to be true with most any established band one would care to name, the later songs (“Theme From Doctor Detroit,” for example) don’t measure up to earlier efforts; but with DEVO the quality of the videos never flags. Certainly not “easy viewing” in the manner of easy listening, DEVO music video clips are thought-provoking, entertaining in their own awkward way, and always exceedingly strange. For those qualities alone, The Complete Truth About De-evolution is worth viewing. For fans of the band – and/or aficionados of the strange – this DVD is a must-own.