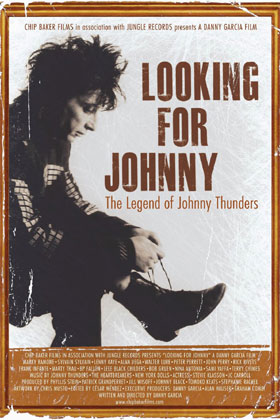 One of the less appealing qualities of music culture –both in rock and jazz, at least – is a tendency toward romanticizing certain fallen characters. While there’s no denying the massive contributions of such figures as Jim Morrison and Elvis Presley, in death they have assumed oversize reputations that their lives and musical output don’t always justify.

And some figures are lionized in a fashion wholly outsized relative to their deserved stature. Though he’s considered by many a “legend,” the Sex Pistols‘ second bassist Sid Vicious could barely play his instrument, as a singer he wasn’t real great, and as a composer…he simply wasn’t. But it’s part of the punk ethos that he was still somehow great.

That punk mythologizing extends to Johnny Thunders (neé Genzale), but at least in his case – in relative terms – it’s somewhat deserving. Thunders wasn’t a technically gifted guitarist, but he did what he did quite well. What he did was filter Keith Richards-style playing and riffage through a New York punk sensibility, bringing a sharp-edged sound to his work, first with The New York Dolls, then as a solo artist, with The Heartbreakers (no relation to Tom Petty) and briefly with MC5 guitarist Wayne Kramer in Gang War.

The title of a new documentary film, Looking for Johnny: The Legend of Johnny Thunders, would suggest an attempt to make Thunders into a legend, assuming interested parties aren’t already convinced he is one. But in reality, the film takes a reasonably objective look at the man and his work. Looking for Johnny relies to a great deal upon actual audiovisual footage of Thunders (onstage and in interviews) to construct a history that avoids becoming a hagiography. The film never shies away from highlighting Thunders’ serious and seemingly nonstop problems with substance abuse, and avoids romanticizing the drug use into some sort of creative fuel for his art. And it deals relatively straightforwardly and unapologetically with his failings as a human, a spouse, and a band member.

Through interviews with those who knew him well (or as well as anyone could know him), Looking for Johnny attempts to fill in the blanks in the man’s history, to ask and answer the important and too-infrequently asked questions. A few figures, however, are most conspicuous in their absence: New York Dolls lead singer/frontman David Johansen appears nowhere in the film, save in live onstage archival footage.

The so-called mystery surrounding Thunders’ 1991 death in New Orleans is given ample screen time. True or not, the filmmakers want viewers to at least consider the possibility that his death came about at least in part due to his leukemia. The thing is, dead is dead, and avoiding the more lurid rumors surrounding his death in favor of a we’re-not-sure-how point of view doesn’t change the fact that Thunders died at the age of 38.

The filmmaking style is unadorned and largely free of cliché. There are a good number of live and studio performances cut into the film, balancing nicely with the chat. And the no-narrator approach works well, letting the onscreen characters (including Lenny Kaye and Bob Gruen) tell the story from their points of view. Perhaps oddly, all three of Thunders’ managers — Marty Thau, Leee Black Childers and Malcolm McLaren – are now, like Thunders himself, deceased. Thau and Childers died in 2014, so their sessions for Spanish filmmaker Danny Garcia remain among their final onscreen appearances.

Looking for Johnny: The Legend of Johnny Thunders is an unpolished, low-budget affair, and it looks like one, but somehow that’s a fitting manner in which to chronicle the life, music and death of a punk icon. Or, if you prefer, a legend.