Album Review: Mark “Muleman” Massey — One Step Ahead of the Blues 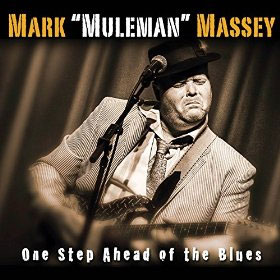 Mark “Muleman” Massey – One Step Ahead of the Blues
You might argue that blues guitarists are a dime a dozen, and as much as I love ’em (the good ones, anyway), I’d have a hard time arguing against the assertion. Massey is a deft practitioner of the style, and while on this album he doesn’t do anything especially innovative, that’s arguably not the job of a bluesman. His vocals favor B.B. King, his playing is lean’n’mean, and songwriting and production by Memphis legend Don Nix (at Ardent Studios, no less) guarantees quality. Soulful horn charts and gurgling B3 are expertly worked into the mix. You could easily do worse.