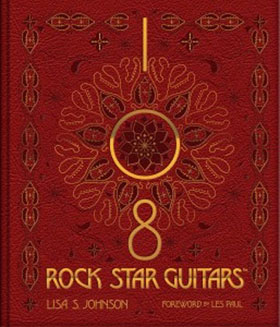 There have certainly been rock-related coffee table books before; some of the best and most notable ones include The Beatles Anthology. And among ones that focus more on imagery than text, Hipgnosis’ Storm Thorgerson has done some excellent ones. Among books that focus more on instruments, Andy Babiuk‘s peerless Beatles Gear is among the best.

There’s a new entry in this category: Lisa S. Johnson‘s 108 Rock Star Guitars. Originally published in hardcover in 2013, the weighty book is now available in a full-size softcover edition. (The softcover results in a lower price, but otherwise there’s noting cheap about this book: color reproduction and binding are all absolutely top-notch.)

Johnson’s photographic approach means that you won’t find many straight-on, full-frame shots of your favorite rock star axes. Instead, Johnson uses what I can’t help but call an “arty” approach to her subjects. Often owing to the demands presented to her by the session – say, the road manager gives her ten minutes post-show to snap her pics in a dimly lit backstage room – many of Johnson’s photos are moody, impressionistic close-up detail shots.

As the author explains in her introduction, she shot many of these guitars in the era right before film photography effectively ended. She credits the vibrant colors to the Kodak film she used, stock specially designed for effective use in low light. Later shots are all-digital, but Johnson doesn’t indicate the medium used on specific photographs.

Each photo section comes with some brief, anecdotal text. Sometimes it concerns the experience of getting to shoot the guitar; other times, it’s some interesting background information about the particular axe’s history. Johnson provides enough technical info – gauge of string used, type of aftermarket pickups that retrofit the guitar in question – to tantalize guitar tech-heads, but probably not enough to satisfy them. (That’s not her goal here.)

The author is clearly a rock fan (no c&w, r&b or jazz players’ guitars here), and her choices of guitars to feature are driven by her musical taste. As a result there are a fair number of metal/hard rock instruments displayed, and guitars such as, say, hollowbody Rickenbackers are in short supply. A few bass guitars and notable acoustic guitars are here, too. And – perhaps owing to the lack of budgetary constraints upon many of these rock stars, there are a large number of custom luthier jobs, greatly modified guitars, and fine exhibits of excellent back-from-the-dead repair work.

108 Rock Star Guitars is – like its subjects and their owners – not without eccentricities. The author makes a point of explaining why she chose the number 108; the explanation might be described as a bit “woo-woo.” And for reasons known only to the author (and perhaps her publisher), the guitars in the book are ordered by the names of their owners. But their first names. So we start with Ace Frehley (KISS) and end with Zakk Wylde (Blizzard of Ozz and a bunch of other bands I don’t care about).

And occasionally Johnson gets her facts wrong: not only does she consistently misspell Adrian Belew‘s first name, she tells the reader that the guitarist was in King Crimson in the 1970s. Um, no*. And while a routine bit of fact-checking would have preempted both mistakes, readers won’t (and shouldn’t) approach 108 Rock Star Guitars as a work of history. It’s a lovely book full of amazing photography of storied instruments. And viewed within those terms, it’s wholly successful. It might make a great gift for the guitar lover in your life, too, unless s/he’s into jazz or country instead of hard rock, in which case you might hear questions like, “who the hell is Phil Collen?”**