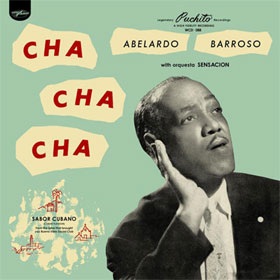 Full disclosure, right up front: I know next to nothing about Cuban jazz. I enjoyed Kirsty MacColl‘s ventures into the genre, and I’ve long had a special place in my heart for The Beatles‘ Let it Be-era outtake, “Besame Mucho.” But that’s about it: beyond being able to say, “Yeah, that sounds like Cuban jazz,” and an appreciation that it influenced American jazz in the 50s and 60s, I don’t know a great deal about the genre.

But like you, dear reader, I do know what I like. And I very much like Cha Cha Cha, the new compilation of recordings featuring famed Cuban sonero mayor (lead singer) Abelardo Barroso, backed by Orquesta Sensación. Fourteen tunes dating from 1950s Havana, the songs on Cha Cha Cha present a delightful sampling of the work that the beloved Barroso did in that period.

It seems that there are quite a few Barroso compilations in the marketplace. His recorded legacy extends back to 1925, and his association with Orquesta Sensación was at the forefront of the “second charanga (Cuban traditional dance music) movement.” The roots of this music are decidedly Afro-cuban, and the mulato (mixed-race) Barroso was at the forefront of the style.

The album’s title might suggest that its contents feature some watered-down, dance-craze LP made by a bunch of gringos (my parents’ LP collection featured just such a record, with a Jane Russell-looking gal on its cover). And the graphical approach used on Cha Cha Cha is pointedly designed to look and feel like an old record: dated fonts, muted pastel colors, etc. But what’s going on in the grooves of Cha Cha Cha is far more substantial than all that: it’s not only historically important music, but it’s a heckuva lot of fun to listen to. Even if – like me – your Español is good enough only to get a drink or a face-slapping (or both).

The dapper Barroso shines on numbers such as “El Manisero,” a much-loved traditional Cuban song about a peanut vendor. The sexual undercurrent is clear in the song’s lyric in which a woman tells us she won’t get to sleep unless she can dine on a, er, peanut cone. The instrumentation on this and the other album tracks includes a good bit of percussion (congas, timbales and such) alongside prominent flute solo fills and silky violins. And the sonic quality of the recordings is superb: if Cha Cha Cha is in stereo (which it may be), there’s a very subtle bit of separation between left and right channels. But the sessions were clearly recorded with a great deal of care; that’s a bit surprising in light of the fact that these recordings were made 1955-57, the height of the Cuban revolution.

The vinyl album – from World Circuit, “the label that brought you Buena Vista Social Club,” the cover copy helpfully explains – is pressed on high 180-gram vinyl, includes a download card (though mine didn’t work online), and a pair of extensive and excellent liner note essays, one of which is an interview with Rolando Valdés, founder and director of Orquesta Sensación. A four-color booklet provides lyrics with English translations and brief background information, as well as lineup information about the orquesta. If one defines “world music” as anything that comes out of anywhere besides the USA, Canada and Great Britain, then Cha Cha Cha should be short-listed as one of 2014’s best world music reissue/compilations.