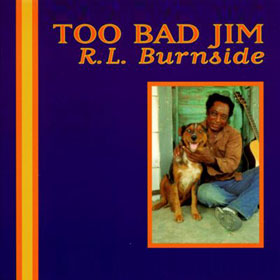 Here’s something that can be described as the sweet spot in a Venn diagram charting a curiosity, a history lesson, and an authentic modern-day reading of country blues. R.L. Burnside‘s Too Bad Jim – newly reissued on vinyl; more about that presently – sounds for all the world like a classic country blues session, the kind of thing Alan Lomax might have captured for the Smithsonian decades ago. Burnside’s delivery – vocal and guitar – is deeply redolent of Mississippi delta bluesmen of old (most notably Fred McDowell), but the production values are positively 21st century.

Which isn’t to say that Too Bad Jim has been gimmicked-up, akin to some sort of White Stripes dilettantism. No, Burnside is indeed the real deal. His blues tunes are true to the spirit of those old field recordings in that his blues is not confined to modern/commercial notions of how long each verse should be. In that he shares a sensibility with artists such as John Lee Hooker: Burnside uses the blues form more as a jumping off point than as a framework. He’s a bluesman, to be sure, but he bends the form to suit his needs. His electrified approach is supported on Too Bad Jim by the sparest of backing: this 1993 recording finds him joined only by bass and drums. Not only is their contribution simple and basic – keeping the spotlight where it belongs – but it’s relatively low in the mix.

And by “mix” I don’t wish to imply that Too Bad Jim has the sound of a multi-track studio recording. The sound is crystal clear and uncluttered, but it very much has the feel of one mic hanging from the ceiling (alongside perhaps a lone, naked incandescent lightbulb). There’s a late-night feel to the ten tracks on Too Bad Jim; that vibe pervades Burnside’s mix of originals, traditional numbers, and a cover of Hooker’s “When My First Life Left Me.” His original numbers – take “Short Haired Woman” for as good an example as any – could have been written ninety years ago, but in Burnside’s capable hands, the songs are timeless. His singing and playing is in turns heartfelt, impassioned, assured, and it’s always authentic.

Too Bad Jim was originally issued on the venerable Fat Possum label. A new subscription service called Vinyl Me Please featured Burnside’s second and highly regarded album as its October 2014 selection. Thick, sturdy heavyweight vinyl is packaged in a higher-gauge cardboard sleeve, along with a download card giving purchasers access to 320kbps (read: high quality) MP3 files. A nice foldout poster will evoke warm memories among those who came of age in vinyl’s 1970s heyday. As part of Vinyl Me Please’s good-natured approach, the package for Too Bad Jim also includes a recipe card for a relevant cocktail, in this case a variation on the Bloody Mary, one that was reputedly a favorite of Burnside’s.

With its monthly offerings, the Vinyl Me Please catalog explores a wide array of genres; the only unifying characteristic seems to be high quality.