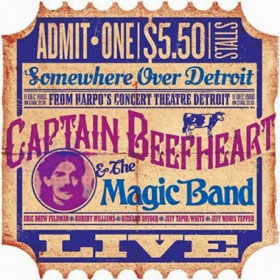 The late Captain Beefheart is one of those rare creatures. The casual music fan is unfamiliar with his name; a subset of those who know of him have actually heard him; fewer still can make a reasonable claim to actually enjoying his music.

Appreciate it, yes: I know of quite a few of my friends (certainly not a cross section of American pop music fans) who own Beefheart’s classic Trout Mask Replica. I have an original vinyl copy myself. But neither they nor I play our copies all too often. Beefheart’s music is challenging at best, making few if any concessions to musical convention. Beefheart’s music can be described as a sort of wild, unhinged free jazz/blues hybrid, often featuring the man’s growling vocals (he reportedly had a five-octave range), along with his saxophone. While his band lineup (generally dubbed The Magic Band) followed the standard rock configuration, Beefheart’s music can’t be called rock, not by any reasonable understanding of the term. That said, Beefheart’s critical reputation is stratospheric.

By 1980, Beefheart (born Don Van Vliet) had entered the second of his most highly-regarded phases; the string of albums released between 1978 and 1982 rank among his best, and those three records – Shiny Beast (Bat Chain Puller), Doc at the Radar Station and Ice Cream for Crow actually sold in some quantities as well. Around the time of Doc at the Radar Station, Beefheart and band were the musical guests on Saturday Night Live. And it was days after that SNL performance – December 11, 1980, that Beefheart and The Magic Band appeared onstage at Detroit’s Harpo’s Concert Theatre. The good news is that someone recorded the show: very few legitimate Beefheart live albums exist, and none of those (up to now) date from this fertile period in his career.

The bad new is that the sound quality is awful. Bootleg enthusiasts – a group that includes myself – may not have such a tough time sitting through this boomy audience recording, but those whose ears are more attuned to studio albums and professional recording techniques might find Live From Harpo’s 1980 tough going. And there’s nothing here that approaches the accessibility of such Beefheart cuts as “Zig Zag Wanderer” (included on the Where the Action Is: Los Angeles Nuggets compilation) or “Diddy Wah Diddy” (featured on the 4CD expanded version of the original Nuggets set).

Those who do endure or tolerate the dreadful audio quality will, however, find their reward: on this night, Beefheart and band (Eric Drew Feldman on bass and synthesizer, drummer Robert Williams, and three guitarists: Richard Snyder, Jeff Tapir/White and Jeff Moris Tepper) tear through a set that draws both from new and old material. Tunes from his first three albums are performed right along with newer material, including about half of the songs on Doc at the Radar Station. The night’s lineup is quite close to the personnel that recorded Doc six months earlier.

The brief liner notes offer a capsule history of Beefheart’s career, noting that the man retired from public performance in 1982, less than two years after this recording was made. The liners also assert that “this CD catches the Captain at his best.” That may well be true, but the capture itself is dodgy; owing to the execrable sound quality, Live From Harpo’s 1980 is best left to completists only; everyone else should stick with Beefeart’s, um, more accessible studio output.