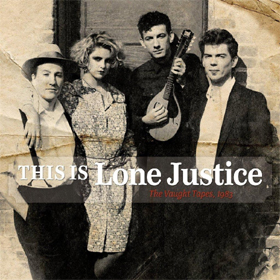 One of the most enduring characteristics of 80s “alternative” music was the cross-fertilization between country and rock. This 80s variant rocked harder than earlier efforts by The Byrds and/or The Flying Burrito Brothers, and was exemplified by a number of excellent bands. The Long Ryders, The Blasters, Jason and the Scorchers, BoDeans and Lone Justice crafted some of the era’s best country-rock. Part of the success of these band was down to their imbuing their songs with a punk sensibility. By the time of Lone Justice’s 1985 self-titled debut, they had fallen prey (to some degree) to the slickness that a major label deal often wrought.

But two years earlier, the band cut a self-produced, live-in-the-studio demo tape that would showcase what they really sounded like. Omnivore Recordings has unearthed these tapes and pointedly titled them This is Lone Justice. There’s much more county and less rock here. Maria McKee‘s unaffected vocals ring true, and the playing is ace. Unreformed rock fans might not dig the clip-clop drumming of Don Heffington, but the originals (joined by covers of “Jackson” and Merle Haggard‘s “Working Man’s Blues”) are strong material that show why the band earned a record deal.