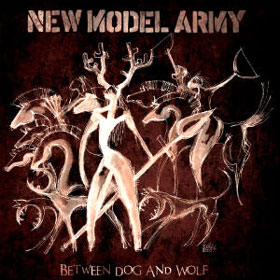 New Model Army are one of those groups whose body of work has gone all but unnoticed in the USA while enjoying some measure of success in the band’s home country of England. Their 1984 debut Vengeance hit #1 on the UK indie charts; neither that nor any of the band’s subsequent eleven studio albums charted in the United States (though all but the first two sold respectably in – of all places – Germany).

With a shifting lineup, only lead singer and primary composer Justin Sullivan remains from the band’s original lineup. But the sound has remained relatively constant.

With shades of Mekons and even Midnight Oil, the band’s 2013 album Between Dog and Wolf is an atmospheric collection of fourteen original songs. Muscular bass, emotionally-charged vocals and a near cymbal-free drumming approach are the hallmarks of this album. Accessible melodies abound; perhaps the record’s strongest track is “Seven Times,” a soulful track that manages to conjure the feel of (the previously mentioned) Midnight Oil, as well as shades of U2 and Hunters & Collectors – all bands with a heyday in the 1980s – without sounding the least bit dated. The insistent tribal drumming style of Michael Dean, coupled with a spare, airy instrumental arrangement – places emphasis on the song’s lyrics and texture.

Dean White is credited with keyboards, and his role on Between Dog and Wolf seems to be adding texture while calling little attention to himself. In this he succeeds marvelously; it’s easy to listen to this album without noticing that keyboards are employed at all. But when one does listen for those keys, it becomes apparent that White’s work adds an important (if delightfully subtle) dimension to the arrangements.

But the twin pillars of the album remain Sullivan’s heartfelt singing and Dean’s drumming. Uniquely, the songs sound almost as if they were composed on drums rather than guitar, though most likely this is not the case. So while the drama of “I Need More Time” – with its near-whispered lead vocal and ghostly chanted backing vocals – is aided and abetted by the guitar and bass work, it’s the drums that truly move the song along. When – nearly four minutes in – the song explodes into full volume, one might realize that it’s the first instance of Between Dog and Wolf having anything that approaches a loud moment.

The fourteen songs on the album largely chart their own territory; only on “Qasr el Nil Bridge” does the band sound like they’re actively trying to sound or feel like anyone but themselves; the song bears more than a passing similarity to Cream‘s “Tales of Brave Ulysses,” most notably in Sullivan’s vocal delivery. But the track’s northern African textures lead it toward a decidedly different ultimate destination.

This is a quiet record; Sullivan and his bandmates would like your attention, but they’re not willing to shout in order to get it. Between Dog and Wolf floats by if one pays distracted attention to it; it’s a subtle album that reveals its deeper shades of meaning only when given the attention it deserves. Recommended.