I observe that Phantom Train is somehow less “80s” sounding than any of The Bongos‘ other records, and wonder aloud whether that’s due to the approach they used in recording the album.

“Each album is very different,” Richard Barone says. “Drums Along the Hudson is like a garage rock record. With Numbers With Wings (1983) we wanted to expand, to get into a ‘wide screen’ sound. We were doing a mini-album, which is why we wanted to cut a live song for RCA: so we could take advantage of those big, wide grooves that 12” singles had. That’s why those records sounded so deep. So that record was deliberately larger than life.

“And Beat Hotel (1985) was a whole different approach. That one was the most eighties-sounding. I think my phrase was, ‘Fuck it; it’s the 80s.’ We had certain guitar effects, I had a guitar synthesizer – something that was used by Kool & the Gang at the time – and all this eighties stuff, and we just thought, ‘let’s make an 80s album.’ It was deliberately of that genre, even down to the cover photos, how we were styled. It was a statement of ‘here’s where we are.’ We were on the road with Power Station…we kind of joined the party.

“And then Phantom Train was a reaction to that. It was time to move on; the train was going to the next stop. I’m a good observer of what engineers do, so I would ask, ‘How do we give it that great sound without making it sound of a particular era?’ We avoided the kitschy elements that were a hallmark of Beat Hotel. And that became Phantom Train: very stark, and yet…lush.

“There wasn’t a lot of second-guessing; we were always moving forward. Trains rarely go backward,” Barone says, perhaps laboring the railway imagery a bit past the end of the line. “If we didn’t get something the way we liked, we did it again. There were hundreds of takes of those songs. So this summer was spent going through all of those takes, and assembling an album out of all the different takes that we had never chosen.

“There might be ten mixes of a song, each different. We would use different arrangers on different takes; it was an endless process. And it was because we liked [doing] it, not because someone was forcing us to do it.”

Having put all of that effort into the sessions, why, I ask, did The Bongos not pursue releasing Phantom Train back in 1986?

“Because I was on my own doing solo shows,” Barone replies. “Simple as that. I had done all that, and it was fun. But don’t forget: for all the excesses in the recording studio that I’m telling you about, there were also excesses in our personal lives. I’ll only speak for myself: that takes its toll on a dude. And I was off and onto another thing pretty quickly. All of us were; not just me. 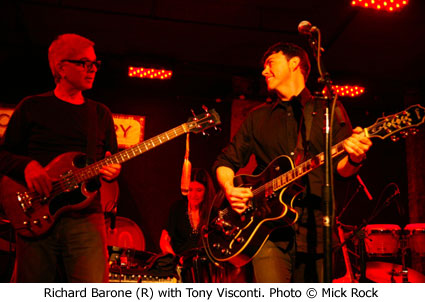 “We came back from The Bahamas. The sessions were done, and there were tapes, but there wasn’t really an album. It was all just pieces of an album. We were doing shows; we were still busy doing performances. But I was really wanting to experience what it’s like for an artist to play an acoustic or electric guitar in a [Greenwich] Village club. And I had never done that. I thought about the Speakeasy down in the Village and thought, ‘That would be fun.’ So I put a little trio together – me, a cello and a guitarist – and started doing some shows. And people really liked it. So we did more shows, and got better. And then I thought, ‘Gee, I could make a live album like this.’ And it was such a reaction to my previous experience making Phantom Train. I thought, ‘Hey, a live album, I can do all in one night!’ So that became my Cool Blue Halo album that was released in ’87.

“And all the other guys in The Bongos were doing other things, playing in other bands. The Bongos are musicians, all of them. Rob Norris, the bass player: he’s in eleven bands right now. Jam bands, Afro-Cuban bands…he’s into a lot of stuff. And Frank Giannini, the drummer, he lives in North Carolina and plays on a lot of things as well. Jim [Mastro], he’s always been involved in a lot of things. He was rhythm guitarist for Richard Lloyd.

“So when Cool Blue Halo came out, it clicked on college radio. And I went on tour for the next three years. I toured with Suzanne Vega for many months. And from there I got signed with Universal, so I was on another train by then.”

So the guys in The Bongos weren’t even thinking about Phantom Train by that point?

“No,” says Barone. “It was an experiment. To me, it’s about the songs. The songs were there; we wrote them. And I was doing them live in my shows! I recorded ‘I Belong to Me’ and ‘Tangled in Your Web’ for the Cool Blue Halo album. And then a couple years later, I did ‘River to River’ and ‘Roman Circus’ on Primal Dream (1990). So the songs were gettin’ out there. And that’s really my job.”

The Bongos did – as the bio says – “quietly split,” but Barone says that the break was an amicable one. “We got together for benefits and things. And through the years, we’ve occasionally done concerts here and there. But we did a lot back when we started; we were a very active band during the first five or six years solid. And now we do it for pleasure.”