Album Review: The Bye Bye Blackbirds — We Need the Rain 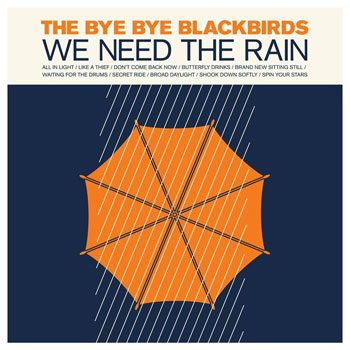 Since getting into this whole Musoscribe racket, I’ve noticed an interesting phenomenon when it comes to that rock genre known as powerpop. Specifically, when some of its most celebrated practitioners – I’m not naming names, but suffice to say these are people I’ve interviewed – are confronted with the idea that they play powerpop, they react in a manner less than enthusiastic. Perhaps they recoil; maybe they change the subject; maybe they protest that what they do is actually better called something else. But to a man, these artists – and I can think of three without trying – seem wholly uncomfortable with the term powerpop, and if they wear the crown at all, they do so reluctantly.

In a sense, it’s easy to understand why. To its detractors, powerpop is a shamelessly derivative substyle. Within rock history, it’s a kind of music that was and is often championed by rock writers (go figure) but one that enjoys relatively little as far as commercial success. Its most successful exponents are all held in high regard by fanatic types (your humble writer among them), but all were flawed in some way that prevented larger acceptance. So while Big Star, The Raspberries, Badfinger and Blue Ash made (arguably) some of the best music of their era, they did so either without honor at the time (Raspberries and Blue Ash) or at great personal cost (Big Star and Badfinger). And it’s worth noting that all of those acts released their prime material in the first half of the 1970s, a period that – need we be reminded – occurred some forty years ago.

With all that baggage, it’s little surprise that modern bands are often loath to accept the powerpop label. But the fact remains that when it’s done well, the style yields some music that combines emotional punch with the visceral punch of a memorable riff. But thank goodness some artists embrace the label.

What brings all of this to mind once again is the new album We Need the Rain by The Bye Bye Blackbirds. This Oakland aggregation hits all the right notes on their fourth collection of songs.

Yes, the requisite components are present: chiming guitars, ear candy hooks, punchy guitar riffage, tight vocal harmonies. But as ever, none of those qualities matter a bit if they’re not built into solid songs. Ten songs might not seem like a lot, and it isn’t unless you’re a prog outfit (which The Bye Bye Blackbirds most certainly are not). But if one values quality over quantity, then one can’t go wrong with We Need the Rain. From the loose snare intro of the glammy, anthemic “All in Light,” the band makes it clear they have not only the ingredients but a winning recipe. And while they do earn the “derivative” epithet thanks to the Rolling Stones nick of the opening strains on “Don’t Come Back Now,” in the end they deliver an original tune, one that has more in common overall with The Records (Crashes era) than “Honky Tonk Women.” And with its great riff, “Waiting for the Drums” – like all the tracks on this album written or co-written by Bradley Skaught – transcends heights so lofty that it’s the equal of the best work The Spongetones ever turned out, and that’s saying quite a lot. What’s more, the tune combines that tuneful appeal with the good-natured aggression of The Smithereens.

Interestingly, when The Bye Bye Blackbirds venture outside their powerpop milieu, as they do on the straight-ahead rock of “Broad Daylight,” the results are mixed. Not a bad tune in any way, it merely pales in comparison to the other tunes on this overall high quality release. “Shook Down Softly” heads back in a timeless direction, with soaring, creamy harmonies atop a chunky riff. And in contrast to “Broad Daylight,” when the band tries its hand at a Neil Young and Crazy Horse flavored rocker (“Spin Your Stars”) it works quite well; save for Skaught’s distinctive and lovely vocals, it could be an outtake from Everybody Knows This is Nowhere. In the end, it shows that The Bye Bye Blackbirds are a fine powerpop band who – if and when they choose to – can be more. We Need the Rain is likely to please both camps: those who want The Bye Bye Blackbirds to explore outside the lines, and those who simply love another example of the best powerpop has to offer.