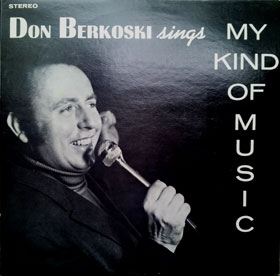 Before his sudden and untimely passing in 2005, my friend and bandmate Dave Jones was an enthusiastic participant in a slightly offbeat pursuit. Periodically, he’d contact a select group of friends, and all would gather at his place – a singular home filled with “naked lady” lamps and other ephemera – and enjoy a Bad Music Party. Yes, Dave would produce – from his vast collection of LPs and singles — all manner of terrible music. He and his friends would delight in listening to these so-bad-they’re-good records, and everyone looked forward to the next gathering.

As such, Dave was always on the look for more material to feed his particular obsession. He’d scour estate sales, garage sales, thrift shops for the most terrible music known to humankind. And he was often successful. An amateurish, homespun or just plain awful cover would often provide clues to the music, and the prices – often less than a dollar – were low enough that he could afford to take a chance that he might’ve found a real winner (loser).

I don’t know the particulars behind his discovery of Don Berkoski Sings My Kind of Music, but I seem to recall that he found a small cache of this late-sixties release in a thrift shop somewhere. He worked out some sort of deal with the cashier, leaving with a tidy stack of these still-shrinkwrapped records. I suspect what actually happened is that he bought one, took it home and played it, discovered he had hit pay dirt, and returned to buy up the rest.

And Dave being Dave, he presented each of his bandmates with a copy of this forgotten classic. I can’t speak to the reaction of the other guys, but I was thrilled.

My Kind of Music is a true stinker. Now, a bit of explanation is in order, and I’ll use the genre of film to illustrate my point. There’s bad, and there’s bad. Attack of the Killer Tomatoes is bad-bad. The makers of this film tried to make an awful film, and they succeeded. Score: zero. Plan 9 From Outer Space, however, is good-bad. Director Ed Wood seemed to be trying to make a decent picture, and the results were so cringingly awful that it ended up being a classic in spite of itself.

Back to music. I don’t like bad-bad, which is why there are no Bon Jovi records in my collection. I do, however – like my departed friend Dave – love me some good-bad. And My Kind of Music is good-bad. To be good-bad, it seems, the key ingredients are (a) ineptitude and (b) a near total lack of self awareness, a blind ignorance of the existence of (a). And Don Berkoski’s self-released record (on the esteemed DEB label, friends) has all that in spades.

It’s easy to imagine the circumstances leading up to this album’s creation. Don and his wife were probably at a fondue party, and at some point in the evening Don rose from his naugahyde chair and went over to where another partygoer was pecking away at a Lowrey organ. “I can sing,” he probably offered. (Lancers wine will make a person think such thoughts.) And since everyone else in attendance was similarly plastered, the consensus was probably, “Hey, ol’ Don’s pretty good.” At some point someone probably slurred something along the lines of “You should make a record, Donny boy.” And such an appeal to the man’s vanity would not go unheeded.

A bit of music trivia: though it might not have been known as such, the click track – a metronomic device that provided a reference point to help keep musicians playing in time – was developed in the early days of motion picture soundtrack recording. But this 1920s innovation seems not to have found its way to Elkhart, Indiana’s Tri-Fidelity Studios. No, instead, the uncredited session musicians merely follow along as Berkoski winds his way through the tunes. And the singer clearly had little sense of timing or meter; he slows down and speeds up at random (yet frequent) points throughout each song. The players gamely struggle to keep up, and the results can best be described as a train wreck.

The singularly-named Dolan (also credited as production consultant and associate engineer, which probably means he sat in the control booth smoking Pall Malls and telling jokes) provides us with a bit of information in the form of some idiosyncratic liner notes on the back of the LP sleeve. He begins by quoting Berkoski: “I’m appealing to my age group…This is what I like, and this is what my friends like.” Dolan goes on to recount a sort of potted history of rock’n’roll and Don Berkoski’s place in that narrative. He even manages to work in some biographical data: born in 1939, loves sacred music, loving wife named Ruby, seven children. But in the end, he admits, “Listening to the record will tell you much more than I could ever hope to convey in these few lines.” So listen we will.

“Witchcraft” is a pretty tricky tune to attempt; its verses feature some pretty complicated beats in a sexy rhumba kid of way. And Berkoski’s phrasing is all but nonexistent, so he’s all over the map. Here the band mostly tries to ignore him; it’s pretty disorienting to hear the wood-block percussion of the verses with ol’ Don’s vocals slipping and sliding all over them. The choruses move into a more traditional style, but Don has trouble keeping up here as well. Luckily the vocal range required for his tune is pretty modest, and thus it is (almost) within Berkoski’s skill set.

Not so with a reading Chuck Berry‘s “Memphis.” The combo organ player sounds like he borrowed that living room Lowrey; the band plays it straight (they sound a tiny bit like Tony Sheridan-era Beatles), and Berkoski is consistent. The problem is that he’s consistently flat.

The beat is all wrong for Elvis‘ “All Shook Up.” For once, the blame can’t be laid at Berkoski’s doorstep; the players turn in a performance that suggests they’ve never, ever heard Elvis’ version. The drummer is especially inept, totally missing the breaks. Berkoski turns in what is perhaps his most competent reading on the disc. But please note that – as used here – competent is relative term.

“Sheila” finds Berkoski sounding a bit tipsy. His phrasing is relatively on the mark, but there’s a slurred quality to his vocals. And the band slows perceptibly on the choruses. “Wear My Ring Around Your Neck” almost swings, and the band turns in a passable – if delightfully cheesy – instrumental performance. But Berkoski’s modest range doesn’t extend the full octave that the song requires. The band stumbles to the end of the song.

Don was clearly a big fan of Elvis. His cover of “Teddy Bear” is as awful as it can get; the guitar – which is relatively competent – is mixed way back, as is the bass guitar, almost to the point of inaudibility. Instead the cheesy organ – which seemingly has but one setting – is the predominant instrument. The unnamed player doesn’t attempt any fancy stuff; he holds down long chords for measures at a time, then changes to the next one, and so on. The drummer does a yeoman job of trying to follow Berkoski’s er, unique phrasing.

I’d never attempt to characterize My Kind of Music as a concept album, but it’s on side two where things get really interesting. The band adopts a c&w persona for a reading of “Release Me,” a hit for Englebert Humperdinck. As they plod along, Berkoski delivers a vocal that’s equal parts tuneless and listless; it sounds as if he was laying on his back when cutting his part.

The band speeds things way up for Glen Campbell‘s “Gentle on My Mind,” but sadly they’re not up to the task. The choice of cheesy organ as a major instrument was an odd arrangement choice, too. Berkoski has a lot of lyrics to put across in this one, and he does so without regard to melody or phrasing. The band does their best to match his phrasing. It’s easy to imagine Don with a lyric sheet in hand during the recording of this tune: I can almost hear him thinking, “There’s no double-space after this phrase, so I won’t pause…I’ll keep right on singing.”

Don and his players get all serious on the maudlin-fest that is Kenny Rogers‘ “Ruby, Don’t Take Your Love to Town.” The guitarist adopts a suitably twangy sound, but Mr. Organ Player sticks with the sound that brought him this far. Berkoski manages a feat once thought impossible: he gets through the entire song without hitting a single note on pitch. And while the song demands a vocal quality that delivers sadness, pathos, regret…what we get from Don Berkoski is merely confusion. When he sings “If I could only get my gun, I’d put her in the ground,” he sounds as if he’s a non-English speaker, singing lyrics phonetically, understanding them not a bit.

The next tune is the pièce de résistance on My Kind of Music. A lesser talent might shy away from The Beatles‘ “Hey Jude.” But not our dear Don Berkoski. The band isn’t up to the task, either. As Berkoski barrels through the lyrics untroubled by any responsibility to remain true to his source material, the band has to skip entire sections to keep up with his phrasing. Sadly, the original’s long “na na na na” outro section is cut off, perhaps unwittingly providing a template for Eric Clapton‘s anemic Unplugged reading of his own “Layla.”

Listen to Don Berkoski’s “Hey Jude” if you dare.

For “The Green, Green Grass of Home” everything is predictably terrible, but somehow the languid performance seems less so in the wake of “Hey, Jude.”

Don Berkoski wraps up his kind of music with the perfectly-titled (but ineptly performed) “Forget Me Never.” Once you hear My Kind of Music, you’ll likely never forget it, either. At the time of publishing this piece, one copy of this rare album was available on eBay for $9.99 “or best offer.” Don’t say I didn’t tell you.

Let’s give Don Berkoski – a man who passed away in September 2001 at the relatively young age of 63, never having gained acclaim for his sole album – the final word. As quoted by liner note writer Dolan, Mr. Berkoski justified his foray into the world of recorded music this way: “People have been pushing me onto bandstands most of my life.”

Postscript 2019: It’s been more than six years since I wrote this essay, and apparently people still read it. So I thought I’d hip future visitors to a new discovery: our Mr. Berkoski also cut a holiday single. You can hear his masterful destruction of “Here Comes Santa Claus” at “The Worse [sic] Thing Ever Recorded.” Happy Holidays!