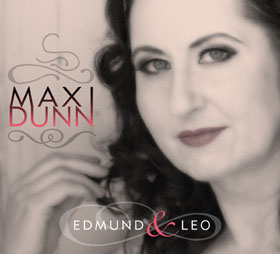 Perhaps it’s unfair – no, there’s no two ways about it: it is unfair – but if you’re a musician from Liverpool, great things are expected of you. The Beatles, Echo and the Bunnymen, Teardrop Explodes (let’s forget about Frankie Goes to Hollywood, the exception that proves the rule) all came from the city on the Mersey.

Born in Liverpool in (probably) the early 1970s, Maxi Dunn would have grown up on a steady diet of those bands as well as others; as a singer and songwriter herself, then, it’s not surprising that a strong sense of melody would form the foundation of her style. On her third full length, Edmund & Leo, Dunn has created a work worthy of her hometown’s reputation. Here she once again collaborates with producer-guitarist Peter Hackett, and as on her previous albums (2007’s Welcome to Soonville and the 2011 release The Neglected Gambit), Dunn writes all of the music and lyrics.

In her songwriterly way, the twelve compositions on Edmund & Leo are wordy pieces, but they’re couched in sympathetic melodies. The album starts off on a baroque note with the title song, a dramatic and vaguely Kate Bush-like number. Piano, strings and crashing cymbals provide an effective backdrop for Dunn’s yearning vocals.

But Dunn shifts gears quickly, taking things in a more uptempo pop direction with “Change the Record.” Here the arrangement has more in common with The La’s or Kirsty MacColl; Dunn’s minor-key arrangement features loads of chiming guitars and exquisite backing vocal overdubs. “Dragonfly” is an even more effective number in that style, with its echoes of Jackie DeShannon; Maxi Dunn knows her way around making a minor chord sound happy. Her vocals alternate between sweet, soft, close-mic’d and a jubilant, soaring, back-away-from-the-mic style.

The loping “Bite Your Tongue” folds in some vibraphone or glockenspiel textures; the waltz of “Take It Or Leave It” shimmers, with its lyrics full of equal parts resignation and regret. The torchy “Buffoon Man” trades in further sadness and regret but strikes a ever-so-slightly hopeful tone (and it manages to use the word “bullshit” in a melodic context). The sunshine pop of “I’m Only Here Because of You” finds Dunn affecting a kittenish vocal style; she’s clearly adept at trafficking in a wide range of pop styles.

“Everything” continues that upbeat vibe: here there’s even stacked chorus of whistles and “woo!” vocals woven in and out of the mix. More chiming guitars and understated electric piano all lead toward the catchy, memorable chorus with its appealing electric guitar fills. It’s one of Edmund & Leo‘s strongest tracks. On “Cover Me” Dunn sounds almost like a couple of completely different singers. She alternates between a girlish warble and a mature, full-voiced commanding lead vocal.

Shuffling drum beats and vibes give “Watching the Stars” a vaguely “Mull of Kintyre” vibe (without the bagpipes, of course, though you may half expect them to appear out of the mist mid-song). The subject matter of “Tuxedo Cat” may or may not be an actual feline; the song’s oblique lyric sits in contrast to the poppy melody (with more yet minor chords, a Dunn specialty). Its electric guitar solo is oddly buried in the mix, however. And the “mmm” vocalizations – meant to, the lyric sheet explains, “omit rude words” – are a bit strange, making this the album’s most perplexing number.

But Dunn is back on firmly accessible territory with “Meteor Shower.” This dreamy tune has a propulsive, lilting “Getting Better” beat, and rocks harder than anything else on the album. Lots of “na na nas” layered atop some wonderful guitar leads (courtesy of Hackett) make this the album’s hands-down winner, and a lovely way with which to end this album.

Maxi Dunn’s website leaves us wondering a bit with the note on her bio page explaining that she is taking “a break away from writing and recording to concentrate on other things.” Let’s hope that break isn’t too long.